"Nineteen firearms listed on the Police Department's evidence log were not found during the inventory," 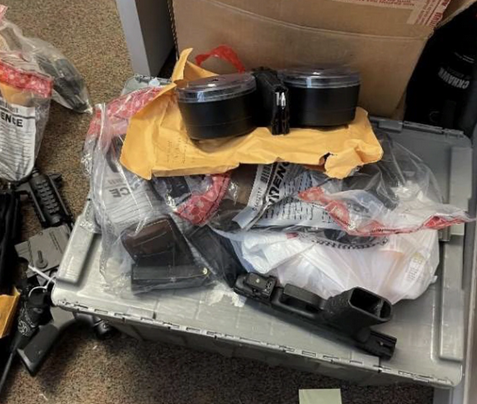 Alabama auditors today issued a scathing report on the town of Brookside, detailing haphazard treatment of evidence, missing guns, unexplained extra guns, an unmarked trash bag filled with prescription medicines, undocumented stacks of cash and evidence crammed into storage wherever it would fit.

inventory," the report said. "Additionally, the inventory revealed sixty-three firearms and numerous ammunition magazines in police custody that were not listed on the Police Department's evidence logs provided."

The audit by the Alabama Examiners of Public Accounts began Feb. 22 at the request of Lt. Gov. Will Ainsworth, after revelations about the tiny town's policing were published by AL.com.

The audit says guns were "carelessly tossed into bins and randomly stored in cabinets inside the evidence closet." The audit included pictures to depict evidence in disarray.

State examiners also found poor financial safeguards by the town, the police department and its municipal court, as examiners came to a list of harsh conclusions.

"This report is a good thing," he said. "It lets us know what we need to improve. Our objective will continue to be to promote confidence in local government through transparent practices and respectful interactions with town employees and elected officials."

The report, however, found many trouble spots.

Counterfeit money was found in the evidence closet, though law enforcement agencies are supposed to turn it in to the U.S. Secret Service.

Evidence labeled for the same case was found scattered into different locations, and a trash bag filled with prescription pill bottles was found in the evidence closet.

"While the pill bottles did not appear to be related to a case, they were in the custody of the Police Department," the audit report says. "However, there were no instructions or labeling on the bag regarding a reason it was being held or disposition of the pill bottles."

Drivers have claimed that police took their prescribed medication and never returned it.

The report found numerous problems with evidence and guns.

The audit report notes that in October of 2021 the Brookside town council approved a number of guns to be sent to an entity called Gulf States for assessment.

Brookside Interim Police Chief Henry Irby, who was hired in February, said in the statement that he has been working to address problems with evidence and protocols.

"We are well aware of the things we need to address and have been actively doing so," he said.

That statement -- see the full release below -- says Irby has since collected all firearms the audit could not account for.

Brookside's court has been suspended since AL.com described how the town built a fearsome police force that came to supply half the town's revenue through fines and fees. Court will resume April 28. Former Police Chief Mike Jones resigned and much of the police force resigned or was let go.

"The Town of Brookside is grateful for the suggestions to improve Brookside's financial practices," the town statement today said. "Every town has room to develop and implement better protocols to ensure the proper handling of public funds."