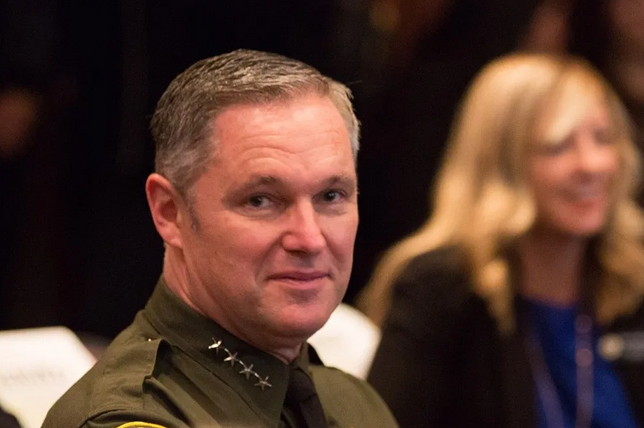 An ongoing review of Sheriff's Department evidence problems has found 91 cases so far where someone was convicted of a crime but "evidence was either never booked or booked after a defendant was convicted," according to District Attorney officials.

The prosecutors' review – which is only about 2 percent of the way through the cases they plan to examine – started in November, when DA Todd Spitzer said he learned from news reports about years-long, systemic problems with evidence being booked late – or not at all – by sheriff's deputies.

Sheriff Don Barnes has publicly said the evidence problems were limited to "a few" pieces of evidence that continue to be missing, and said last month that "There have been no cases impacted, absent one."

However, in response to Voice of OC's questions brought on by revelations in new court filings, DA officials confirmed Monday their ongoing review has found dozens of cases where evidence was never booked by sheriff officials.

In their emailed answers to questions, top DA officials said so far they've identified 91 cases "where there was a conviction and evidence was either never booked or booked after a defendant was convicted," and that they've notified defense attorneys. The vast majority – 71 of the cases – involve evidence that was never booked, said spokeswoman Kimberly Edds.

Two months into their review, DA officials said Monday they've looked at 570 cases so far, centered on 17 deputies the Sheriff's Department referred for criminal prosecution, and plan to search another 22,000 Sheriff's Department cases by hand to ensure evidence was actually booked.

"This review is anticipated to take up to six months. In the event that additional instances are discovered where reports stated that evidence was booked when in fact it was never booked or it was booked late, the District Attorney will ensure that defense attorneys are properly notified and that justice is carried out," DA officials said in their statement.

[Click here to read the DA's office's answers to Voice of OC's questions about missing evidence.]

After news broke in November that Orange County sheriff officials found hundreds of cases of missing evidence, Sheriff Don Barnes said concerns were overblown and the impact was minimal.

All but "a few remaining pieces" of evidence have "always been in our possession," Barnes told National Public Radio last month. The news agency said he was referring to "the results of the two audits" and "continued investigations into missing evidence."

"He insisted that the sheriff's department has had custody of all evidence involved in cases that have already been decided by the courts," NPR wrote.

"There have been no cases impacted, absent one" involving a missing ATM card, Barnes said in a different interview last month. The article went on to say, "In every other case, the evidence was eventually booked."

But the ongoing review by prosecutors – as well as court documents – are prompting questions about whether Orange County's top law enforcement officer has been telling the whole truth.

Separately from the DA's review, a judge last month noted the Sheriff's Department found that in 74 different reports, a single deputy claimed evidence was booked when in fact there was no record of some or all of that evidence actually being booked.

"The Court ordered discovery of the 56 reports in which [Deputy Bryce Simpson] claimed to have booked property or evidence in which there was no record of any property or evidence ever having been booked into the system, as well as 18 of the reports in which the report indicated certain evidence was booked, but there was some of that evidence missing," the Dec. 16 ruling states, according to an image of the ruling revealed in a court filing last week by Assistant Public Defender Scott Sanders.

Asked why the sheriff publicly said only one case has been impacted, the sheriff's spokeswoman said Barnes was speaking specifically about a single audit – known as the "secondary audit" – that looked at a subset of 450 reports, not the 98,000 records examined in an earlier audit.

"In the interview with City News [Service], Sheriff Barnes was discussing results from the secondary audit which reviewed 450 cases," said Carrie Braun, a spokeswoman for Barnes. "The initial results showed that 57 cases had missing evidence, but after additional review, the debit card was the only missing item from the secondary audit."

But Barnes' quote in the City News Service report – "There have been no cases impacted, absent one" – doesn't limit his comments to just the secondary audit.

Asked why Barnes stated broadly that only one case was impacted, and why didn't he mention the 74 allegedly false reports about evidence, Braun reiterated, "This statement was in reference to the findings from the secondary audit that looked at 450 cases."

Sheriff officials did not dispute the court's summary of their findings but said they could not comment about specifics due to an ongoing investigation.

"Our Department alone identified this issue, conducted internal audits, and held accountable individuals who violated Department policy, including submission to the District Attorney for their consideration to prosecute the individuals involved," Barnes said in a statement last week in response to Voice of OC's questions about Simpson.

"Just as we have in this case, I will continue to identify areas that need correction, implement necessary change, and hold accountable employees who do not meet my or the public's expectations."

Sheriff officials now say they do not know how many cases are affected by the evidence booking problems and are in the process of figuring that out.

"We are continuing to work with the [Orange County District Attorney's] office to identify any affected cases, and that review is ongoing," Braun said last week.

District Attorney officials said Simpson's reports involved 74 cases, "all involving evidence not booked." A majority of those criminal cases were not filed, though at least 32 were filed and prosecutors have notified defense attorneys.

Among the 91 total cases where defense attorneys have been notified of evidence problems, there have not yet been any requests for "a case dismissal, a reduction in charges or a request to withdraw a plea," DA officials said.

"The District Attorney's Office is doing our own top to bottom review of every pending and closed case to ensure that justice is carried out and that defendants' rights are being protected," the DA's office said in its statement.

According to its internal report number, the investigation into Simpson started in 2018 – at least a year before Barnes asserted just one case has been impacted by the evidence problems.

"The Sheriff's Department fully understood the full scope of Simpson's misconduct more than a year before those public statements were made," Sanders, the public defender, said in an interview this week.

For at least two years, Barnes' department kept secret a widespread evidence booking crisis at the Sheriff's Department that has the potential to affect thousands of criminal cases.

An internal audit found hundreds of cases where deputies failed to follow policy in booking drugs, cash, photos, and videos in criminal cases by the end of their shift.

"When you don't have a prompt booking of the evidence, then there can be an argument that evidence has been somehow tampered with or something, if it doesn't go directly from the scene to the evidence locker," said Mario Mainero, a law professor at Chapman University who wrote a legal textbook about evidence rules in court.

Spitzer, whose office prosecutes the criminal cases now potentially at risk, has publicly raised concerns he wasn't told of the scale of the problems until November, after Sanders revealed the secret audit's existence in a court filing.

"I have concerns that my office may have filed and prosecuted criminal charges against individuals based on [Sheriff's Department] reports that inaccurately stated evidence had been booked," Spitzer wrote in a November letter to Barnes.

Voice of OC attempted to contact Simpson and his attorney for comment, through the sheriff's deputies' union, which has a legal duty to represent deputies facing discipline.

The department's findings about Simpson's 74 allegedly false reports were disclosed in a court filing last week by Sanders, the public defender who years ago brought to light the sheriff's informants scandal.

Sanders is now asking a judge to lift protective orders that block public disclosure of sheriff records about evidence misconduct. A hearing before Judge Cheryl Leininger is scheduled for next Thursday, Feb. 6 in her Westminster courtroom.