The issue of untested rape kits sitting in law enforcement agencies'
evidence vaults has been a nationwide problem in recent years. In other states, the backlogs were created by officers' mishandling of cases and a lack of resources to keep up with the evidence testing process. 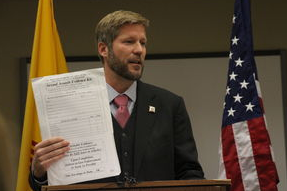 State Auditor Tim Keller announced at a news conference in Albuquerque on Tuesday the findings of a yearlong audit to determine the reasons for a backlog of 5,400 untested evidence kits in rape cases statewide, some dating back to 1988.

"I certainly was surprised, especially by the magnitude of difference between us and the next state," said Keller, who was accompanied by advocates for victims of sexual assault.

The audit found two key reasons for the backlog: "the decision of some law enforcement agencies not to test all kits as they were received, and shortcomings in the systems used to track and monitor the testing of kits." "

While guns, drugs and money tend to be subject to specialized handling procedures, Sexual Assault Evidence Kits are not," according to the audit. The issue of untested rape kits sitting in law enforcement agencies' evidence vaults has been a nationwide problem in recent years. In other states, the backlogs were created by officers' mishandling of cases and a lack of resources to keep up with the evidence testing process.

In 36 percent of the cases, police reports offered no reason for failing to send a rape kit to a crime lab for processing, according to the findings. "When we see a kit on a shelf and the reason is a lack of perceived victim credibility, we're just reinforcing those worst fears," said Sarita Nair, chief government accountability officer in Keller's office.

"We're just discouraging people in society from coming forward." Keller's office audited eight police departments in the state and reviewed the policies of more than 100 law enforcement agencies to find reasons for the backlog, which included evidence in the sexual assault of a victim as young as 3. Seventy-three percent, or 3,476, of the untested kits are from the Albuquerque Police Department. Another 472 stem from cases in the Bernalillo County Sheriff's Office. A 2006 law requires law enforcement agencies to send rape kits to a crime lab for analysis.

Department of Public Safety Secretary Scott Weaver, who also was at the news conference Tuesday, said that as part of a recent change in police training requirements, all cadets and officers going through retraining will have an hourlong class on the law. After police receive a report of sexual assault, the victim chooses whether to let a nurse collect DNA evidence, such as saliva, semen and blood, by swabbing the victim's body.

The evidence kit can also include undergarments or other clothes that may contain the victim's or the perpetrator's DNA. If testing is done on the evidence, the results can be checked against a state database for a DNA match. New Mexico law requires jailers to obtain a DNA sample from everyone arrested on suspicion of a felony.

Connie Monahan, coordinator of the statewide Sexual Assault Nurse Examiner Program, read a statement at the news conference from a Las Cruces woman, identified as Charlene, who was raped in July 1999 when she was 21. The DNA evidence collected in the case helped lead to a conviction, the statement said. According to Charlene's statement, investigators were able to identify the suspect 13 years after the crime, following the assault of another woman. Eventually, the man was sentenced to nine years in prison for raping Charlene.

The concern about untested rape kits arose in the state last year when Weaver's predecessor,Greg Fouratt, sent out a survey asking law enforcement agencies how many untested evidence kits they had, following complaints from rape victims' advocates. He learned there were more than 5,000, with the majority in Albuquerque. Law enforcement officials blamed understaffed and underfunded crime labs for the backlog, or they said they didn't have the technology to process the rape kits.

The state Legislature this year allocated $1.2 million to the Public Safety Department to hire more lab technicians and expand its crime lab in Santa Fe to process about 1,400 untested rape kits. So far, 138 of the kits have been sent to the lab, where tests are pending. Albuquerque police have their own forensics lab to process rape kits, which also is used by the Bernalillo County Sheriff's Office.

"We can fix the backlog without addressing the systemic underlying issues. But we shouldn't," Nair said. "We can just pour a lot of money into testing these old kits and staffing up the labs and training technicians without ever talking about things like trauma-informed police work." However, Nair said, "the entire reason we did this project is to make sure that we don't ignore those institutional and systemic problems that got us here to this point." Contact Uriel Garcia at 505-986-3062 or . Follow him on Twitter @ujohnnyg.
Tweet
How do you feel about this post?
Happy (0)
Love (0)
Surprised (0)
Sad (0)
Angry (0)
Former Morganfield Police Chief Arrested
Former DPD officer given probation
Comment for this post has been locked by admin.