Wood told the World last week that Adcock collected a series of items from a local auction house, primarily electronics, that had been in the Bever home and deposited them in a locker with the intent to take them to the department's property room later but forgot to do so 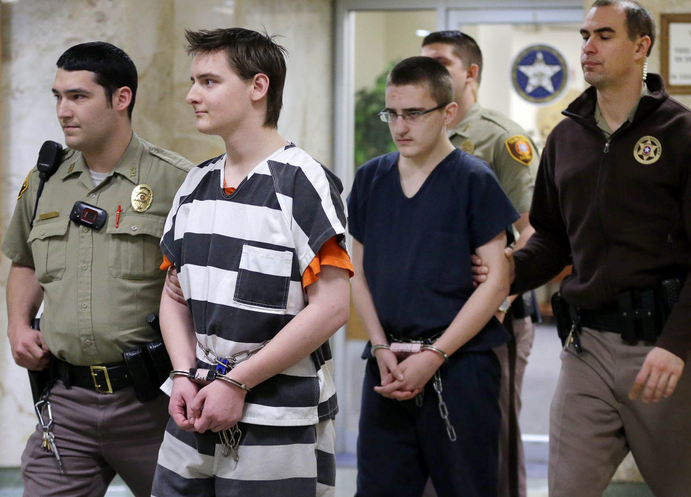 Gayla Adcock had been scheduled for a hearing this week about her status with the Broken Arrow Police Department and was on paid administrative leave pending an inquiry into whether she violated policy. It is not clear whether that hearing occurred, but city Communications Coordinator T.J. Gerlach said Friday afternoon that Adcock has resigned from the department effective March 1.

Michael Bever, 19, is scheduled for a jury trial in April, while Robert Bever is serving multiple no-parole life sentences in the July 2015 stabbing deaths of the siblings' parents and three of the brothers' five siblings. A fourth sibling also was stabbed but survived and is expected to be a witness in Michael Bever's trial.

The Tulsa World filed an open records request for any communications Adcock gave the city indicating her desire to resign, but did not receive a response as of Friday evening.

Adcock's decision to resign before the conclusion of the internal inquiry appears to preclude the public from knowing what sanctions, if any, she would have faced as a result of her conduct. Court records indicate Adcock was the affiant on multiple search warrants related to the seizure of multiple electronic items from the Bevers' residence, which has since been demolished.

Wood told the World last week that Adcock collected a series of items from a local auction house, primarily electronics, that had been in the Bever home and deposited them in a locker with the intent to take them to the department's property room later but forgot to do so. Those items had not been marked as having potential value as evidence, but an auction house employee notified police that investigators could inspect them before they were sold in case they were relevant to the murder case.

The Oklahoma State Bureau of Investigation worked with Broken Arrow police to compile reports and evaluate evidence against the Bevers, including attempts to run tests on electronics in hopes of obtaining data. Wood said Adcock went to Oklahoma City with another detective and a reserve officer to pick up those items and that although she signed a document recording that they were obtained, those present did not log each item received.

Wood said a hard drive that had been with that evidence is now missing and that a search of Adcock's home did not reveal clues as to its whereabouts. Despite this, Wood maintained that Adcock was forthright about her work on the case and had no intent to commit misconduct.

The Tulsa County District Attorney's Office has said it remains confident in the strength of the state's case against Michael Bever, with District Attorney Steve Kunzweiler saying he would not call a witness to testify for the prosecution if he learned there were legitimate concerns about his or her credibility.

Kunzweiler said Friday his office was aware of Adcock's resignation and that it would not affect the prosecution of the case.

"She was not the lead detective, and other investigative officers will be able to sponsor the necessary evidence and testimony in the case," he said.

Chief Public Defender Corbin Brewster, who represents Michael Bever, has also asked for communications — if they exist — between prosecutors and other authorities regarding Adcock's involvement in the case and her handling of evidence.

When contacted Friday evening, Brewster said he wanted to withhold comment on Adcock's situation but could request a hearing that would determine how much, if any, information about what happened can be revealed in the trial.

Gayla Adcock has resigned from the police department effective March 1 in the midst of claims that she mishandled evidence while investigating the case against brothers Michael and Robert Bever.
http://www.tulsaworld.com/homepagelatest/broken-arrow-detective-submits-resignation-amid-allegations-of-mishandling-evidence/article_01dd6739-4cbe-5f4e-9f07-77d677ace285.html
Tags:
Big Three: Chain of Custody assault  kits altered evidence
PRINT