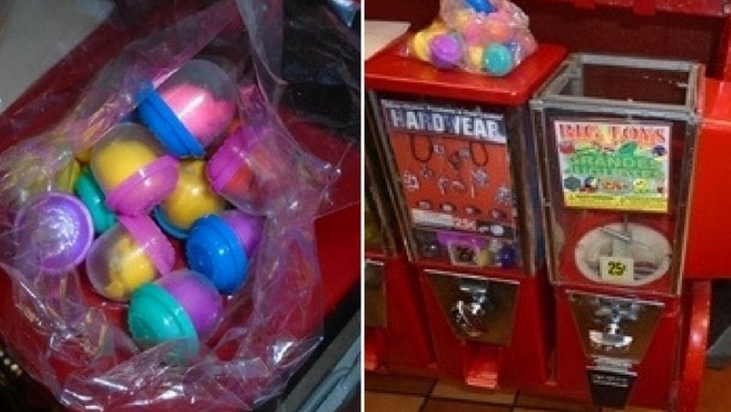 A mom and her son bought the toy from a vending machine for a quarter at Taqueria Los Altos restaurant in Bell Gardens, police said in a news release. The boy was playing with the ball until it burst, revealing white powder hidden in the toy.

150 POUNDS OF METH FOUND IN POPCORN BOXES AT BORDER ENTRY

Police tested the white powder and discovered it was cocaine. They seized 136 grams, nearly five ounces, of the drug from the vending machine, according to police.

Officials said the number on the side of the machine was registered to "Snack Time Vending," urging the public to report toys distributed by the company.

However, an unnamed woman at the company said her business didn't own the machines that contained the drug-filled toys, according to The Los Angeles Times.

"We're getting a bad rap," the woman told the newspaper, adding that the firm did own two other machines in the restaurant that had the company's name and number listed.

The woman also said detectives probably assumed they were responsible for the machines because the ones they own were nearby. She added that the owner of the machine in question probably don't know about the drugs because the toys placed in them were usually bought in bulk on the internet or from wholesalers.