May 07 Posted by Joe Latta in Northeast

Swinton, who was 51 years old and had no significant criminal record, always maintained his innocence and endured a lengthy trial in early 2001. 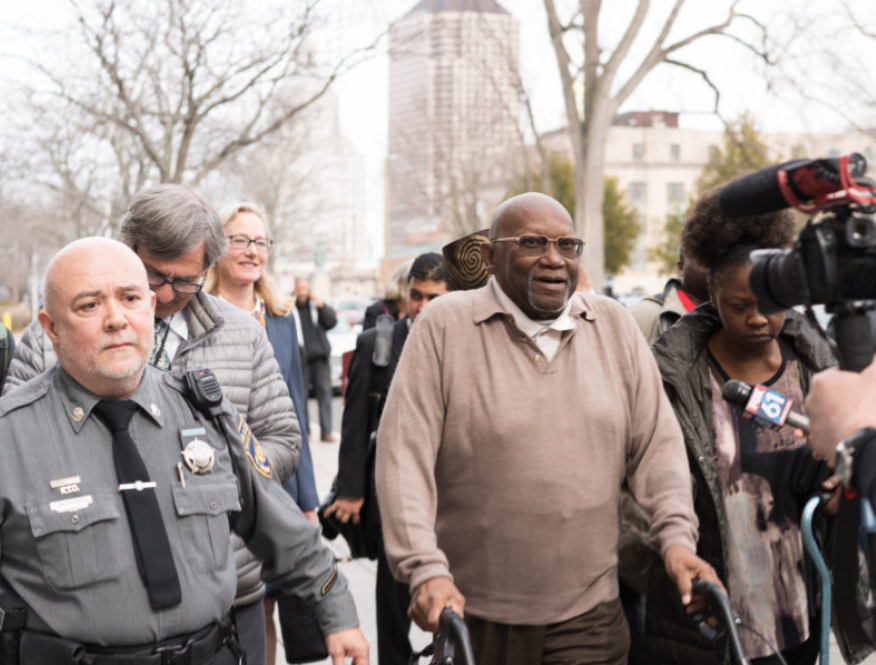 (Hartford, CT – March 1, 2018) With the consent of Hartford State's Attorney Gail Hardy, a Connecticut judge dismissed the 1991 murder indictment against Alfred Swinton today based on new DNA and other evidence proving his innocence. DNA testing excluded Swinton as the source of male DNA collected from underneath the victim's fingernails, the rape kit and swabs taken from a bite mark on the victim. Additionally, the bite mark analyst, Dr. Gus Karazulas, now acknowledges that his testimony connecting Swinton to the crime was not based on science. Swinton is the 30th person to have been wrongly convicted or indicted based at least in part on bite mark analysis, yet courts continue to allow prosecutors to rely on the widely discredited evidence. Swinton, whose 2001 conviction was vacated back in June 2017, wrongly served 16 years.

Pledge: Take a stand against wrongful conviction in Connecticut, today

"We are grateful to State's Attorney Hardy for recognizing the powerful evidence of Mr. Swinton's innocence and moving to right the injustice caused to him," said Maura Barry Grinalds of Skadden Arps, which assisted on the case.

Adnan Sultan, a staff attorney for the Innocence Project, added, "Mr. Swinton's case highlights the need to change the law in Connecticut. While the state places no time limit on introducing new DNA evidence, there is a three-year deadline after a conviction to present new non-DNA evidence of innocence. DNA is unavailable in most wrongful convictions, and without it, Mr. Swinton likely would not have gotten back into court with the new evidence discrediting the bite mark testimony used to convict him. The legislature is considering a bill to remove the arbitrary time limit and put Connecticut in line with the majority of other states, and Mr. Swinton's case underscores the importance of passing it."

Swinton became a suspect in the 1991 murder of Carla Terry soon after her body was found on January 13, 1991, because he had been in the same bar as the victim on the night she was murdered. He was arrested for the murder after police conducted a search in the basement of the apartment building where he lived and recovered a bra in a box in a common area that contained other clothing and objects. In addition to the bra, which the state theorized belonged to the victim, the state presented bite mark analyst Dr. Lester Luntz at a probable cause hearing who claimed that bite marks on the victim's body were linked to Swinton. The court concluded that the evidence was insufficient to establish probable cause and Swinton was released.

Alfred Swinton walking out of court after his exoneration on March 1, 2018.

The case went cold for several years, until October 8, 1998, when Swinton was again charged with the murder. At the subsequent probable cause hearing, the victim's sister, who had not identified the bra in 1991, changed her testimony, claiming she had given it to the victim on the night she was murdered. The state also presented a new bite mark analyst, Dr. Karazulas, who testified – based upon a reasonable degree of scientific certainty – that Swinton "caused the bite mark that is depicted in the photographs" of the victim's breasts, and that he was able to identify that the injury was inflicted "just before or at the time of death." Based on this new evidence, the court found probable cause to charge Swinton with murder.

Swinton, who was 51 years old and had no significant criminal record, always maintained his innocence and endured a lengthy trial in early 2001. The only physical evidence linking Swinton to the crime was the testimony of the victim's sister and Dr. Karazulas's bite mark evidence, which was presented over the course of five days of trial testimony, far more than any other witness. The state put on several witnesses who gave conflicting testimony about Swinton's presence in the bar on the night of the murder. Three informants with substance abuse problems or prior felony convictions claimed that Swinton made statements relating to the victim in the months after her death nearly a decade earlier. The state also introduced portions of a tape recording from a freelance writer who interviewed Swinton for an article sensationally titled, "Killer at Large." While the article implied that Swinton made self-incriminating statements, the unedited tape of the interview revealed that Swinton consistently professed his innocence. The state also presented a jailhouse informant used in at least one other case who claimed that Swinton confessed to the crime. However, in a secretly recorded conversation between the informant and Swinton, there were no incriminating statements. Rather, Swinton maintained his innocence and asked, "Why are you picking on me?" Swinton was convicted and sentenced to 60 years.

"Mr. Swinton's case highlights the need to change the law in Connecticut. While the state places no time limit on introducing new DNA evidence, there is a three-year deadline after a conviction to present new non-DNA evidence of innocence." Sultan

The Connecticut Innocence Project originally represented Swinton and, thanks to a federal Bloodsworth Post-Conviction DNA Testing grant that aides states and localities in providing access to post-conviction DNA testing, was able to conduct DNA testing in 2014 and 2015 that pointed to Swinton's innocence. Testing of the bite mark swabs indicated the presence of saliva and identified male DNA not matching to Swinton. DNA testing of the bra for "wearer" and "touch" DNA revealed the presence of skin cells that did not match to the victim or to Swinton, strongly suggesting the bra was never worn by the victim.

Because of a conflict, the Innocence Project took over Swinton's representation in 2015, and after bringing the case to the attention to the state's attorney's office, DNA testing of the fingernail scrapings of the victim was performed. Results also excluded Swinton.

Innocence Project lawyers also contacted Dr. Karazulas, who served as the chief forensic odontologist of the Connecticut State Police Forensic Science Laboratory for more than 25 years, about his testimony. Since his 2001 testimony against Swinton, the scientific community has rejected bite mark analysis as a forensic method capable of identifying a suspect, finding that it is not based on science. A 2009 landmark report by the National Academy of Sciences found that there is "no scientific basis for forensic odontologists (bite mark analysts) to proffer individualization testimony." Every other scientific entity that has examined bite mark analysis, including the President's Council of Advisors on Science and Technology and the Texas Forensic Science Commission, which recommended a ban on the use of bite mark evidence, has also condemned the use of bite mark analysis. In fact, the American Board of Forensic Odontologists, the accrediting board for bite mark analysts, no longer permits analysts to make a positive identification from bite mark comparisons. In an affidavit filed with the court, Dr. Karazulas acknowledges the scientific community's repudiation of bite mark analysis and maintains that he no longer believes that Swinton is the person who inflicted the bite mark on the victim. Mr. Swinton is the 30th person since 2000 whose conviction was vacated or indictment dismissed based, at least in part, on bite mark evidence.

"Dr. Gus Karazulas is also to be commended for his courage in acknowledging that there was no scientific basis for his testimony linking Mr. Swinton to the crime."- Fabricant

"Dr. Gus Karazulas is also to be commended for his courage in acknowledging that there was no scientific basis for his testimony linking Mr. Swinton to the crime," added M. Chris Fabricant, director of Strategic Litigation at the Innocence Project. "Despite the fact that 30 people have been wrongly convicted or indicted based at least in part on erroneous bite mark evidence, many forensic odonatologists continue to work with law enforcement, and judges continue to permit this evidence that scientists, including those with the National Academy of Sciences and President Obama's Council of Advisors on Science and Technology, have widely condemned as having no scientific basis. Indeed, the Innocence Project is litigating against the admission of bite mark evidence in two pending capital murder prosecutions in which prosecutors are seeking to introduce this entirely discredited technique."

Since his conviction was vacated in June 2017, the state has continued to reinvestigate the case, including conducting additional DNA testing on the victim's jeans, bra, and human hairs found at the scene, that excluded Swinton.

In addition to Fabricant, Sultan and Grinalds, Swinton is represented by Vanessa Potkin, Director of Post-Conviction Litigation for the Innocence Project; Ed Tulin and Thania Charmani of Skadden Arps; and Ken Rosenthal of Green & Sklarz. 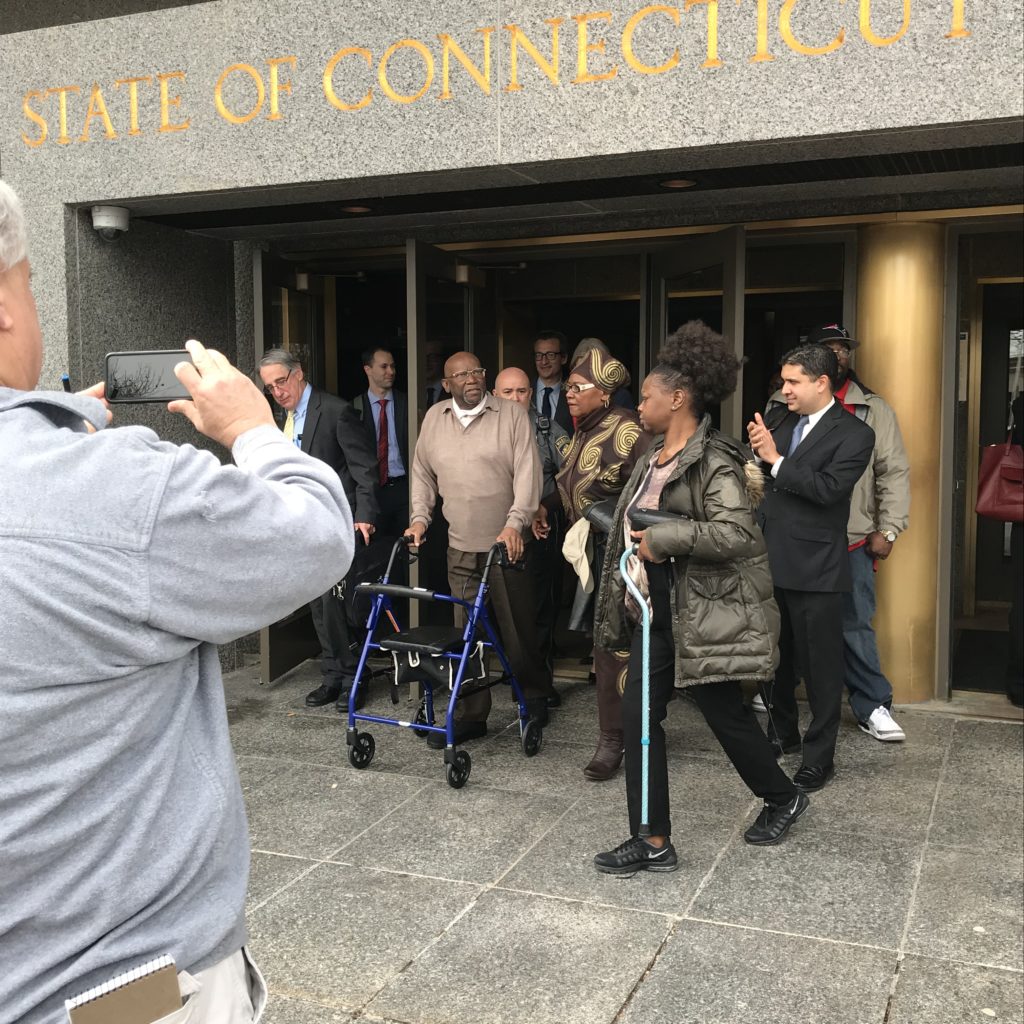