More than 30 deputies have been referred for possible charges in an evidence booking scandal that centers on alleged false police reports about evidence that was either booked late or never booked at all. 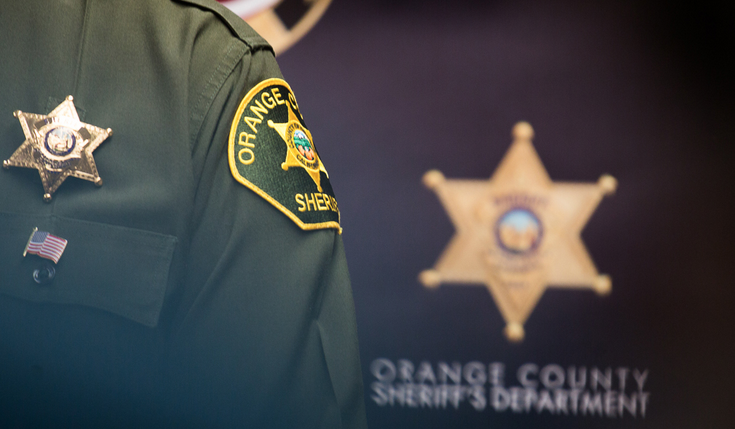 A probe into false statements by Orange County sheriff's deputies escalated this summer, with a grand jury hearing testimony from a wide-ranging list of sheriff's officials before indicting a deputy with a felony for filing a false police report.

More than 30 deputies have been referred for possible charges in an evidence booking scandal that centers on alleged false police reports about evidence that was either booked late or never booked at all. So far, two deputies have pleaded guilty to misdemeanors and a third, Edwin Mora, was indicted by the Orange County Grand Jury.

Newly-available court records from the Mora case reveal the grand jurors heard testimony that produced over 1,200 pages of transcripts.

A total of 18 witnesses were examined, according to the indictment, which names them and became a public record when it was recently unsealed. Among the witnesses were the two deputies who previously pleaded guilty in the evidence booking scandal, Bryce Simpson and Joseph Atkinson.

District Attorney investigator Michael Kendrick was also called as a witness, according to the public indictment document.

Presenting the case on behalf of the DA's office was Patrick K. O'Toole, a former federal prosecutor and top public corruption prosecutor at the San Diego County District Attorney's Office, who was brought in by Orange County DA Todd Spitzer as a special prosecutor for the evidence-booking scandal.

Under the grand jury process, prosecutors secretly take their case to a panel of 19 jurors who hear witness testimony and write questions prosecutors ask aloud of the witnesses. If the grand jury believes there's probable cause that a crime was committed, it approves charges through an indictment.

The vast majority of state and local criminal cases in California do not involve the grand jury process, but rather prosecutors filing charges directly in court.

The grand jury indictment accuses Mora of "knowingly and intentionally" making a material false statement in a police report on Aug. 30, 2017, by writing he booked a knife, methamphetamine, and glass smoking pipe into a Sheriff's Department locker in Santa Ana.

Mora's attorney, Robert J. Hickey, didn't return a phone message seeking comment. The former deputy has pleaded not guilty to making a false police report as a law enforcement officer, which carries a maximum penalty of three years in prison.

Mora was fired in August 2019 as a result of an internal sheriff's investigation, according to the department.

The evidence booking scandal was kept secret for about two years by the Sheriff's Department until news reports last November revealed the department had conducted audits that found widespread late bookings and false statements by several deputies. That prompted Spitzer to take another look at cases previously rejected by prosecutors.

In nearly 300 instances, the audits found the evidence was booked more than a month late. The delays can raise questions about whether the evidence was contaminated and the ability of prosecutors to verify to courts that evidence was truly collected. And in at least 57 cases, a second audit found deputies lied about booking evidence that they did not actually book.

The audits were finished in spring 2018 and February 2019. But the Sheriff's Department didn't disclose it to the Orange County Board of Supervisors or the public until a reporter learned of the reports in November 2019 and contacted the department for comment. On the day the first article ran in the Orange County Register, sheriff's officials first told county supervisors about the audits, noting a news story was coming.

The District Attorney's Office previously declined to prosecute Mora after sheriff's officials referred him for possible charges. But prosecutors took another look at Mora and other deputies after the audits became public last November. Spitzer said the wide-ranging evidence problems were kept secret from him.

After reviewing the evidence again, prosecutors decided to pursue the charges against Atkinson and Simpson and a grand jury indictment against Mora.

Nick Gerda covers county government for Voice of OC. You can contact him at ngerda@voiceofoc.org.