Of the 3,542 rape kits tested since that law was enacted, CBI found 691 matches in a national DNA database, giving police a new chance at finding suspects 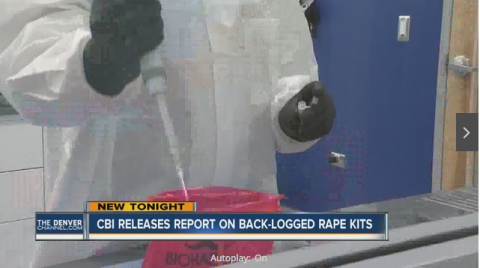 ARVADA, Colo. -- The Colorado Bureau of Investigation said it has found DNA matches in 20 percent of the state's backlog of rape kits.In 2012, the Denver7 Investigators found thousands of untested rape kits in evidence lockers throughout the state. A law passed in 2013 required Colorado law enforcement agencies to have their previously untested rape kit evidence analyzed. Of the 3,542 rape kits tested since that law was enacted, CBI found 691 matches in a national DNA database, giving police a new chance at finding suspects."[What's] significant is to help give closure to the victims to help identify a perpetrator and bring them to justice," Janet Girten, Forensic Service director, said. In May 2015, Colorado Springs Police made first arrest as a result of the testing of these backlogged kits. That department said the DNA evidence identified 44-year-old Gary Hargraves as the suspect in a 2007 rape in Colorado Springs' Memorial Park.""The one thing that's significant for Colorado is that law enforcement's un-submitted backlog no longer exists," Girten said. "We have seen a three and a half to almost four times monthly submission increase of sexual assaults." Authorities said the testing also helped solve the 1984 sex assault of a Greeley waitress by two men who are now awaiting trial on kidnapping charges.District Attorney Michael Rourke said the effort gives victims closure. ---------Sign up for Denver7 email alerts to stay informed about breaking news and daily headlines. Or, keep up-to-date on the latest news and weather with the Denver7 apps for iPhone/iPads, Android and Kindle. Copyright 2016 Scripps Media, Inc. The Associated Press contributed to this report. All rights reserved. This material may not be published, broadcast, rewritten, or redistributed.