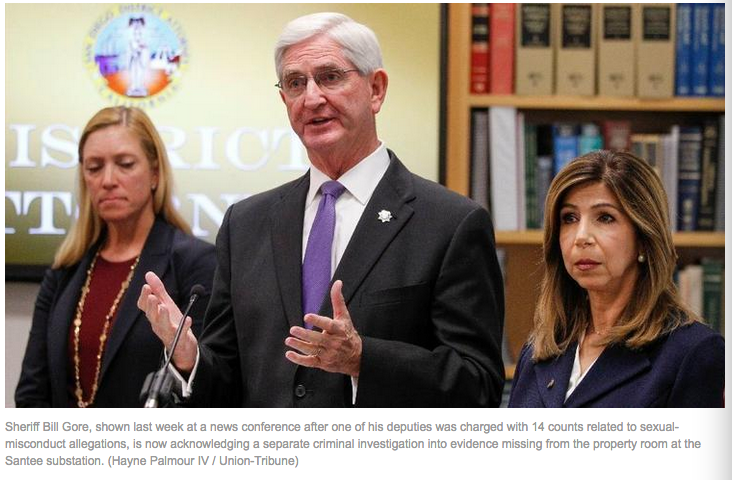 By every account, the property room at the sheriff's substation in Santee was a mess. Bags of evidence cluttered the shelves and so much material was stored haphazardly that it was nearly impossible to track.

Last March, when the problem had swelled to an unmanageable state, the station captain confronted the property clerk about organizing the vast inventory of recovered electronics, seized cash, drugs and other material.

"During the course of the internal investigation, it became clear that a deeper investigation into potentially criminal violations needed to be pursued," Lt. Karen Stubkjaer said in a statement Thursday in response to an inquiry from U-T Watchdog. "A full-time fraud investigator was assigned and she was supplemented with other specialized investigators and an investigator from the DA's Office."

By December, internal-affairs agents were prepared for a formal interview and sat down with Messig. She quit the next day.

"The San Diego County Sheriff's Department has continued to move forward with the ongoing criminal investigation," Stubkjaer said. "This includes working with the District Attorney's Office to ensure that all evidentiary avenues have been exhausted prior to the case being submitted for review by the District Attorney."

Public records posted by the website Transparent California show Messig was paid about $37,000 a year. Reached by telephone on Thursday, she said the property room was disorganized for a long time. She accepted responsibility for the condition of the storage room but said she never took anything that was not hers.

"That's the busiest substation in the county and there is a lot of evidence," said Messig, 49, of Santee. "I should have asked for help a long time ago to get it organized and I didn't. I take responsibility for not keeping that room as it should have been."

During a 90-minute interview on Dec. 19, Messig said, investigators did not ask about property being stolen from the storage room.

"They asked about procedures — how you release property, who signs for the property, standard questions," she said. "I answered them honestly. Yes, we were aware that property was missing."

According to public records, Messig filed for bankruptcy three times — in 1996, 2002 and 2006. She also has had eight separate liens recorded against her since 1997. She did not want to discuss the personal situation that led to the financial setbacks.

But "there are reasons for these things," she said. "I'm really upset. I worked for the Sheriff's Department almost 10 years. I was a very good employee."

The Sheriff's Department maintains evidence rooms at most of its 21 substations and offices across the county, although they differ in size and scope. Generally, the rooms are used to store property that is seized or recovered during investigations.

In busier evidence rooms, the number of individual exhibits can reach into the thousands. Much of the cash, drugs, electronics and other property is never called upon for display at a trial, so the property can remain in storage for years.

The property-theft case is the second criminal investigation to involve Sheriff's Department employees in recent days.

Last week, Deputy Richard Fischer pleaded not guilty to 14 charges related to a sexual-misconduct allegations leveled by more than a dozen women over the past several months. He faces a preliminary hearing in May.

In an interview just after the Fischer arraignment, Gore said public trust is critical to the success of any law enforcement agency.

The department also is conducting an internal investigation into sexual misconduct accusations against Assistant Sheriff Rich Miller, although that case does not appear to involve criminal allegations.

Miller has denied any improper behavior and resigned effective Friday.

Gore, who is seeking a third four-year term after being appointed to the position in 2009, is facing sheriff's Cmdr. David Myers on the June ballot.