Norm Howard, a former Redstone Township police officer, leaves Magisterial District Judge Metros' office on Friday morning after being arraigned for tampering with evidence and theft of seized property when he was still a police officer. At the beginning of this year, Howard pleaded guilty to punching a suspect in the face then lying about it, for which he received three years of probation. Due to his already-monitored status, he was released on
$25,000 bail Friday. 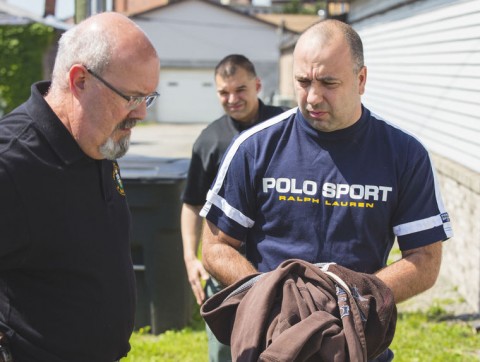 A former Redstone Township police officer currently serving probation for punching a suspect in the face was arrested on Friday for allegedly stealing over $2,000 and tampering with evidence while he was a cop. Norman Leo Howard III, 43, of 420 Morgantown Street, Uniontown was escorted to the office of District Judge Michael Metros where he was charged with theft by failure to make required deposition of funds received, unlawful use of a computer, tampering with evidence and obstruction.

The charges were filed by the Fayette County Bureau of Investigation following an internal affairs investigation performed by the Redstone Township Police Department that began in 2014 following Howard's resignation as a sergeant in the department. Howard pleaded guilty and was sentenced in federal court this January to three years probation for a 2013 incident where he punched a suspect in the face and then lied about it.

The affidavit of probable cause states that in 2014, Redstone's newly-appointed police chief, Troy Rice, found that certain evidence in the police property/evidence room had signs of tampering that included seized cash was missing from torn envelopes. Howard had oversight of the evidence room when he was hired at the department in 2007, according to the report.

An audit was conducted on seized and forfeit funds in the department's evidence room in September 2015 by the Fayette County Controller's Office, county detectives, Rice and an officer with the Redstone Police Department. The audit found $684 was missing from a listed $806 seized in a 2010 drug case where Howard was the case officer and $2,020 was found missing from $9,564 in an evidence envelope seized by Howard in 2013, and it was found that Howard had allegedly falsified the report and did not include the money seized, but it was in other reports that $9,564 was seized in that case. The total amount missing was $2,704.

During the course of the investigation, Rice discovered an EMachine Desktop computer was missing as Howard unlawfully removed from police evidence to his personal possession. Rice assigned a state constable to recover and return the computer, which was returned to the police department in December, 2014, and turned over to the FBI to investigate in June 2015.

The FBI found that the computer was new and in a sealed box when Howard confiscated it, but when they examined the computer's contents, they found that hard drive was removed. Metros set Howard's bond at $25,000 and made it unsecured because Howard is currently serving house arrest with electronic monitoring as part of his probation. A preliminary hearing for Howard is scheduled for 9:30 a.m. June 29 before Metros.