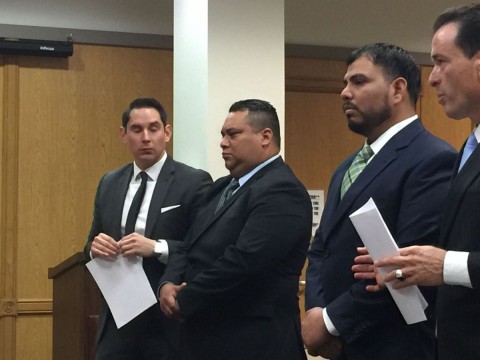 EDINBURG — Barring any last minute plea deals, a former Sullivan City police chief will take his case to a jury in less than two weeks after a hearing Wednesday afternoon.

Miguel Martinez, who resigned from the department April 8, appeared in court Wednesday for a status hearing in connection with abuse of official capacity charges.

Martinez was set to agree to a plea deal last month but Martinez's attorney, David Higdon, requested and was granted more time at the hearing.

Martinez is scheduled for a final pre-trial hearing June 20 with jury selection scheduled for the following day, according to court records.

The former chief has been in and out of court since early February when he and another former Sullivan City police officer were formally arraigned on a variety of charges, including abuse of official capacity.

At that time, Sullivan City attorney Ric Gonzalez said De La Mora told Martinez he had taken home marijuana leaf remnants from off the evidence room floor to give to his grandfather who used it as a pain remedy.

Sgt. Daniel Duran, who was suspended without pay for breaking the chain of command, filed a whistleblower lawsuit in state District Court against Sullivan City Sept. 16, 2015, according to the lawsuit.

"On Friday, May 22, 2015, (Duran) reviewed the surveillance footage from the previous day taken from a camera installed in the evidence room. Upon doing so, (Duran) saw the same certain Sullivan City police officer place the seized narcotics into a container not used for law enforcement purposes and take it out of the department. This taking of seized evidence was done in front of other officers of the department and another member of the department that made reporting of the incident up the chain of command futile. The actions of (Duran's) fellow officers and superior(s) violate the laws of the State of Texas. Therefore, plaintiff conveyed his observations to the Texas Rangers," according to court records.

Martinez was charged with theft by a public servant and two counts of abuse of official capacity.

De La Mora, who is no longer with the department, was charged with theft by a public servant, two counts of abuse of official capacity and possession of marijuana, five pounds or less but more than four ounces, according to the indictment.

KGBT-TV reported a tentative plea deal was reached in De La Mora's case but details had not been finalized and a message to attorney Ricardo Salinas seeking confirmation went unreturned as of press time.

Martinez began in the position in an interim capacity in June 2013 when the previous chief, Juan Alejandro, stepped down after only six weeks on the job. Martinez was officially appointed to the position the following December.