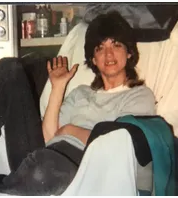 About a year ago, Spring Hill Police Department patrolman Ty Hadley saw a book on a desk inside a co-worker's office and unknowingly started a life-changing conversation.

The hardback, "In the Name of the Children" by retired FBI Special Agent Jeffrey L. Rinek, belonged to Melissa Wilson, the department's evidence technician manager and his colleague of seven years.

"I don't like true crime, but it would be really cool to solve a cold case," said Hadley, a 31-year-old field training officer with the department, which covers just over 26 square miles of Middle Tennessee.

"We have one," Wilson said. "And we have a lot of good evidence on it."

Little did the duo know their chat would not only help close a nearly 30-year-old homicide case in their department, but lead to the discovery of a man accused of being a serial killer whose victims span two states and counting.

Their curiosity ended in a search earlier this month that led local, state and federal law enforcement officers about 700 miles from Spring Hill, Tennessee, to northeastern Iowa, where they ultimately arrested 58-year-old Clark Perry Baldwin and charged him with murder in the 1991 death of 33-year-old Pamela Aldridge McCall and her unborn child.

Baldwin, a long-haul truck driver who'd traveled across 48 states, Canada and Mexico, was arrested without incident May 6 at his downtown Waterloo, Iowa, home after investigators last month linked his DNA with semen and other materials recovered from McCall and two other victims in Wyoming in the 1990s.

It's definitely really weird how it came up. Just a chance thing," said Wilson, a 35-year-old married mother of one daughter who, over the course of the reopened yearlong investigation, spent hours sifting through thousands of papers and boxes of evidence in the unearthed case.

"That was a really good phone call to get. I knew it was just a matter of time before they would be able to locate the person (Baldwin)," Spring Hill Police Chief Don Brite said, recalling the initial frustration and final elation in his department of 63 sworn officers in northeastern Maury County, roughly 40 miles south of Nashville. "This is satisfaction knowing all the years that this case has not been solved. It just shows through joint cooperation with law enforcement across the country that we can work together," said Brite, who has led the department since 2010. "Good old-fashioned police work came into play, too."

McCall, whose mother called her Pammy and often went by the name Rose, was born in 1958 in Cedar Rapids, Iowa.

Described by her mother, Marsha Lyell of Topping, Virginia, as free-spirited and transient, McCall often hitchhiked through states including Virginia, South Carolina, Georgia and Tennessee.

"She would ride the country with truckers," recalled retired Spring Hill Police Capt. Ron Coleman, the lead detective in the woman's slaying.

"I think she was shoulder-carried up there and dropped," Coleman, now 63, said.

"We think she'd been killed in that area within 12 to 24 hours of her being found," said Brent Cooper, attorney general of the 22nd Judicial District in Tennessee, whose office formally reopened the case.

An autopsy determined McCall had neck injuries and died of manual strangulation. Sperm was recovered from pantyhose worn by McCall, who was last seen at a nearby Tennessee truck stop a day earlier.

Pamela Rose Aldridge McCall, who was born in Cedar Rapids but lived in Virginia, shown in an undated family photo. McCall and her unborn daughter were killed in Tennessee in 1991. After nearly 30 years, her alleged murderer was arrested in May in Waterloo, Iowa thanks for DNA evidence. (Photo: Provided photo/Special to the Register)

"It took a month to ID her," Coleman said. "I had to send out fingerprints to every police department I thought she could have been at."

At the time, police had several people of interest in mind, said Tommy Goetz, the chief investigator for Cooper's office who traveled to Iowa last month to help catch Baldwin.

"She was known to ride with one particular trucker frequently, but he was eliminated because of an alibi and his log books," Goetz said.

Police have arrested Clark Perry Baldwin and charged him with murder in the 1991 death of 33-year-old Pamela Aldridge McCall and her unborn child.
https://www.tennessean.com/story/news/crime/2020/05/15/spring-hill-tennessee-cold-case-pamela-aldridge-mccall-clark-perry-baldwin/3091571001/