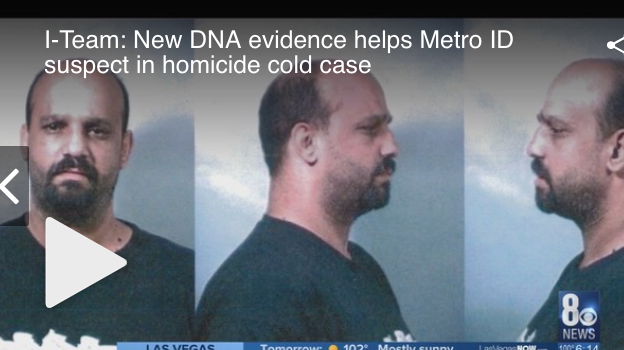 LAS VEGAS - Homicide detectives are asking for the public's help in locating a prime suspect in a murder investigation that began 13 years ago. The Clark County District Attorney has issued an arrest warrant in the strangulation death of an 84-year-old grandmother.

Widow and grandmother Dorothy Sargent was strong and independent.

She had lived in the same house on Isabelle Avenue since 1963, long after her husband died, and her son moved back east.

But in December 2005, neighbors called police after Sargent wasn't seen by anyone for a few days.

"These are the kind we live for; a purely innocent victim," said Ken Hefner, Metro homicide detective.

Hefner was one of the homicide detectives on the scene the day Sargent's bound body was found in a back bedroom of her home. Based on blood patterns and other evidence at the scene, police think Sargent might have been in a chair, knitting when someone knocked on her door.

"So she answers the door," Hefner says. "She gets stunned right away. He takes her back to the chair because it's close; takes her there to secure her further," Hefner continued.

Mrs. Sargent was then forced into a bedroom where she was strangled.

"Such evil stuff was done to her, beyond just taking things from her," said Dean O'Kelley, Metro's Cold Case Team.

Detectives were stymied. They collected DNA from the scene but were unable to find a match in the National Data Base.

In 2017, a new more advanced DNA kit became available. Colleagues in the crime lab mentioned the new kits to the cold case team, so the sample from the Isabelle Avenue home was re-tested.

Months later, they had a match. The DA's office issued a warrant for 48-year-old Dino Marks.

Marks is a career criminal with multiple arrests in Nevada and California. In arrest reports, he's used different names, different social security numbers, even different ethnicities, such as black, white, and Polynesian. At one point, he even possibly said he was a gypsy.

"Multiple names and dates of birth and different various identities are consistent with that in addition to the criminal activity," O'Kelley said.

Detectives say Marks was arrested in Las Vegas in 2004 and 2006, both before and after the murder. When he lived in Las Vegas, Marks also went by the name 'Niki Guy.'

Marks was last seen in southern California in 2010. Marks is 5-feet-11-inches and weighs close to 250 pounds.

He has several distinctive tattoos: The names Marie and Nickie on his chest as well as hearts and a rose on his left arm. Marks also has New York-themed tattoos, including the twin towers and the Big Apple. On his right arm, he has tattoos that read Chili Pepper and Argentina.

Much like Metro Police, Sargent's family has never given up hope of capturing her killer. A reward of $10,000 is still being offered for any information that leads to the killer's arrest.

Anyone with information is urged to contact the Las Vegas Metropolitan Police Department's homicide division.