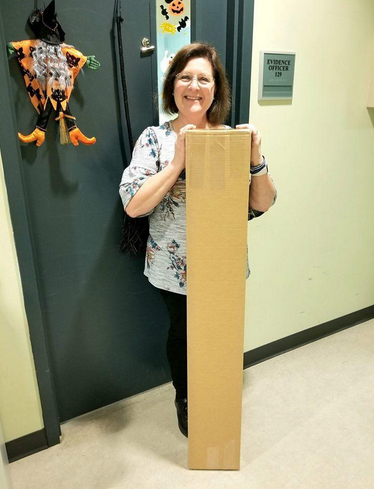 "It's not very common for stolen property to be found and returned to its rightful owner," Captain Rich Fletcher said. "(So) it's always kind of neat to get something back that's been missing for 20 years."

The Stevens .22 caliber rifle was stolen from a Kelso man in 1999. The suspect was caught and the gun was recovered, but it wasn't until 2009 that the Cowlitz County Prosecutor's Office authorized the Kelso Police Department to return the gun to its original owner, said property and evidence clerk Susan Ricketson.

That long delay is because prosecutors typically want to ensure a case is completely resolved — including any potential appeals — before relinquishing evidence, Ricketson said.

As a result, some evidence, especially items from significant cases like homicides, can end up in evidence “basically forever.”

“With the technology changing (and) what the crime labs are able to do, you never know when something might be able to go back to the lab and be tested,” Ricketson said.

But the rifle stayed in evidence for nearly another decade before Ricketson and another employee reviewed it during an inventory in May. The crime predates Kelso’s current electronic records system, so information on the case was scant.

“We decided that we should probably look into it since it had been there for so long,” Ricketson said.

She learned the name of the original owner, who died in 2016, using a police records system. Combing through internet searches and legal paperwork, Ricketson found the owner’s son, who was the rightful heir of the rifle.

That man, who Kelso police declined to identify, lives out of state and “had no idea” the gun even existed, Ricketson said.

Ricketson lives in Castle Rock and has worked at KPD since January 2018. Her job typically involves logging evidence collected by officers the night before and returning evidence from completed cases to the rightful owner. She previously worked for 20 years at a sheriff’s office in California.

Returning items that people have lost in the process of police work is the best part of the job, she said.

“It feels good, especially in this case ... to get one more piece of their parent to them,” Ricketson said. “Here, my goal is to do the best I can to get the property back to people. I don’t want to have to dispose of it because I couldn’t find them … no matter how small or big it is.”

A rifle stolen from a Kelso resident 20 years ago was sent to the owner’s next of kin this week after a Kelso police clerk found the firearm in a
https://tdn.com/news/local/kelso-pd-clerk-returns-rifle-kept-in-evidence-for-about/article_c6ff926d-9a57-5212-ab48-601aaa6b937a.html
Tags:
West Coast evidence room stolen gun stolen propery
PRINT