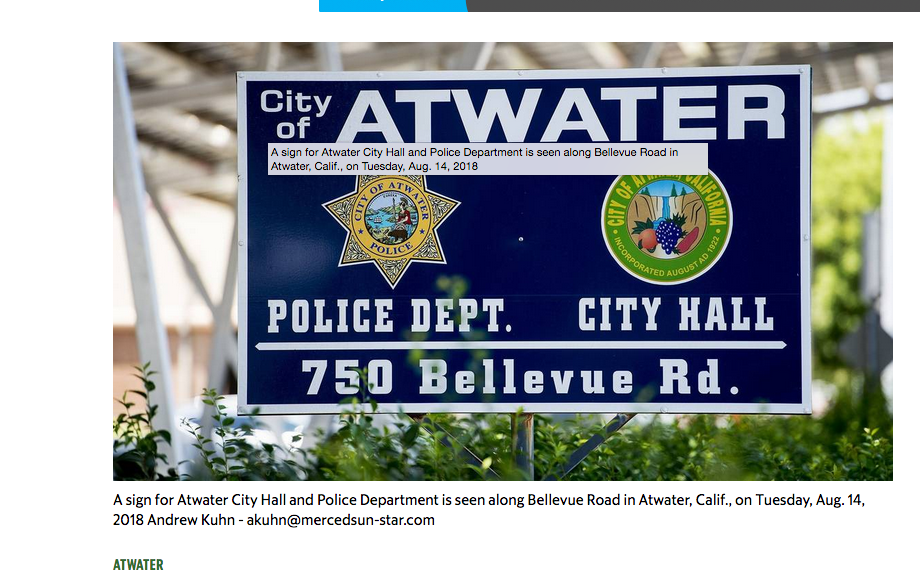 Problems with the Police Department's evidence room came to light last week when a letter from District Attorney Larry Morse II surfaced. It informs area defense attorneys that some evidence may be missing. The Sun-Star has confirmed investigators believe the missing evidence may include guns, drugs and cash.

The Atwater Police Department shut down its evidence room last week pending completion of an investigation led by the California Department of Justice.

Joseph has been on paid administrative leave since January. De Werk stepped down as interim city manager in March after serving just four months on the job. He filed a hostile work environment claim with the city after the mayor apparently accidentally sent him a profanity-laced text message, according to multiple sources.

During his brief tenure, de Werk ordered an audit of city departments, including the police department. During de Werk's audit, city officials said, discrepancies were discovered with the department's evidence storage.

But Joseph's attorney — who acknowledged having no proof — said questions surrounding the evidence room have been manufactured to justify suspending Joseph.

"My suspicion is if evidence is missing from the evidence room it's because de Werk and his confederates probably saw to it and removed them after Sam (Joseph) was no longer in the department," he said. "That's my suspicion and we'll probably be in a position to establish that eventually."

No public record has surfaced of any official accusing Joseph of being responsible for the allegedly missing evidence. City leaders have declined to answer any questions regarding Joseph's suspension, citing personnel laws requiring confidentiality.

Rains pointed to the fact that Joseph was placed on leave the day before a "no-confidence vote" was taken by the Atwater Police Officers Union as evidence of a plan to unnecessarily fire Joseph.

"There was not a single instance where anyone alerted the chief that there were any improprieties, any irregularities, any problems with the way in which evidence was being booked and maintained," Rains said. "That's important because if in fact there were problems with evidence, certainly the district attorney's office would be aware of it."

Reached by phone Tuesday, de Werk brushed off the claim, saying issues with the evidence room were brought to his attention shortly after he was appointed to lead the city. De Werk, a former police chief in Ceres, said reviewing a city's evidence room practices is "one of the most important tasks" for any incoming city manager or police chief.

"Officers informed me that there were problems with the evidence room," he said. "I even heard the same comments from some members of the public. None of the police personnel that I spoke with could recall that there was ever an evidence room audit, so that became one of my first priorities."

De werk said he asked the Merced County Sheriff's Office to do an independent audit, which was confirmed last week by Sheriff Vern Warnke.

"I was motivated to deal with the evidence room issue as a result of my professional experience and training, and also the statements made by various people about possible problems with missing firearms, cash and drugs," de Werk said.

He said he could not comment on why he placed Joseph on administrative leave in January.

But problems with evidence-storage practices in Atwater have been documented from before the most recent revelations, according to an audit conducted in 2010 by the California Commission on Police Officers Standards and Training.

The police department in 2010 apparently did not keep a sign-in sheet for who went in or out of the room, nor did it control who could use the key to get inside, according to the audit.

Richard Hawthorne was chief in 2010, according to the audit. The assistant chief at the time was Frank Pietro, who went on to be the top officer in 2011. Pietro's No. 2 officer, Joseph, became chief in 2016 after Pietro announced his retirement.

Current Interim Police Chief Drew Bessinger said Monday that, before he shut down the evidence room, the department had two trained custodians with access to keys. The interim chief, who took his role on July 2, said he was trying to get his bearings on Atwater's policies surrounding the evidence room.

"I think some of those things (from the 2010 audit) were implemented," he said.

Bessinger said he was made aware of the issues with the evidence room on his first day and participated with other area law enforcement when they spoke with the state Attorney General's Office last month.

Officials say they haven't yet nailed down how long the evidence room may have been compromised. Defense attorneys and prosecutors have said the missing evidence could potentially benefit defendants.

City leaders remain mum on whether the state of the evidence room has played any role in Joseph's paid suspension. Attempts to reach Pietro were also unsuccessful on Monday.

Atwater City Attorney Doug White pushed back against any idea that the investigation into the evidence room was unfounded.

"I think the level of engagement shows you everything (you need) to believe this is being done for the right reason," he said on Monday.

Officials have said all new evidence collected by Atwater police officers will be stored with the Merced County Sheriff's Office until the state audit is complete.