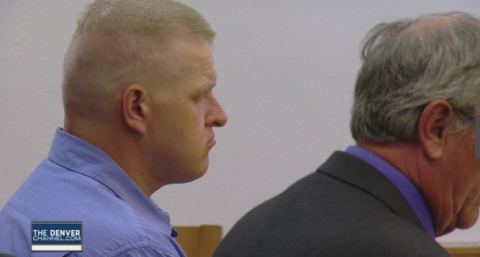 LINCOLN COUNTY, Colo. -- A judge sentenced the brother of a Lincoln County sheriff to spend 90 days in jail Friday after pleading guilty to embezzling public property.

Dustin Zane Nestor admitted stealing weapons from the sheriff's office's unlocked evidence locker while he worked there as an employee.

Earlier this year, Denver7 Investigates revealed Dustin Nestor confessed to stealing a Smith & Wesson revolver and giving it to convicted felon Daniel Charles Thompson, hoping Thompson would sell it for about $1,400. He later told investigators he remembered during a therapy session that he also took a second firearm from the evidence room.

The sheriff's office did not discover the weapons were missing for weeks until Thompson's wife reported her husband threatened her with a gun and she believed her husband obtained guns from Dustin Zane Nestor, according to arrest documents.

Arrest documents also show Nestor admitted in April of 2015 he took the weapons and resigned from his job at the sheriff's office, but the investigation went on without charges for eight months. In December, Denver7 Investigates began asking questions about the status of the investigation. Within days, Nestor was arrested.

When Denver7 Investigates' Chief Investigative Reporter Tony Kovaleski asked why it took so long for charges to be filed, District Attorney George Brauchler responded, "I think that's a fair question."

He attributed the delay to a lengthy forensic computer analysis and a key investigator's illness.

"Our call had nothing to do with it?" Kovaleski asked.

"Listen, if I got a call from Tony Kovaleski that said, 'What's the status of this case?' Would that light a fire under me to find someone in my office to say, 'Why is this drawing the attention of the public?' Yeah!" Brauchler said.

"Might it have taken another week or two to get it filed, but for your call.... OK, I can live with that. But I don't think it was languishing on a desk waiting for your call," the district attorney added.

"There was no special treatment for the brother of a sheriff?" Kovaleski asked.

"Not a chance. Not in this jurisdiction. No way," Brauchler said.

Sheriff Tom Nestor told Denver7 Investigates earlier this year his office improved security measures for its evidence locker. He did not attend his brother's sentencing Friday.

"I would not expect this from any of my employees -- brother or not. They're treated the same. I am appalled," Nestor told Denver7 earlier this year. "I have no doubt in my mind he is remorseful. I don't know what was going on with him at the time. I can't speculate on that but I have no doubt about his remorse."

The district attorney's office told Denver7 the evidence Nestor took involved cases that had already been adjudicated, so the thefts did not impact any pending prosecution.

Court records show Daniel Charles Thompson pleaded guilty to a felony charge of making a straw purchase of a firearm in connection with Nestor's case. He is set to be sentenced in August.