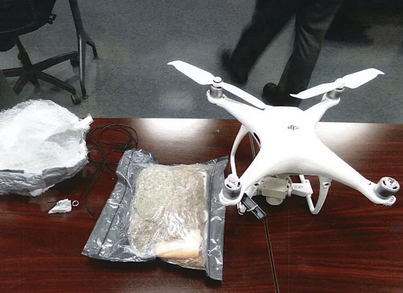 If anyone is missing a Christmas package, including a large, white drone, it's in the hands of the Richland County Sheriff's Office.

Tuesday, a deputy was dispatched to the 1200 block of Evergreen Avenue West in Madison Township on a report of suspicious activity. A drone was located with a package attached containing drugs and other items, according to Capt. Donald Zehner.

Zehner said a resident said another person heard a noise of something hitting the house around 10:30 p.m. Monday.

The two women went outside and found a drone against the house with a package attached by a cord, the sheriff's report said.

The two women said the drone was still "beeping."

The deputy who arrived on scene said upon looking into the package, he found multiple bags of suspected marijuana, 2 cell phones with chargers for them and a bag of suspected loose tobacco, according to the sheriff's repot.

The contents of a package attached to a drone found Monday night on Evergreen Avenue West contains 2 cell phones and chargers, loose tobacco and suspected marijuana., according to the Richland County Sheriff's Office.

All the LED lights were covered with duct tape, the deputy reported.

The Phanton Drone is valued at $2,100. The package was in bags with bubble wrap and Duct tape.

Zehner said authorities believe there is a good possibility the package was intended for one of the prisons — either Richland Correctional Institution (RICI) on Ohio 545 or MANCI on Ohio 13 North.

The package landing site is about two miles from either prison.

"At this point we don't know yet," Zehner said.