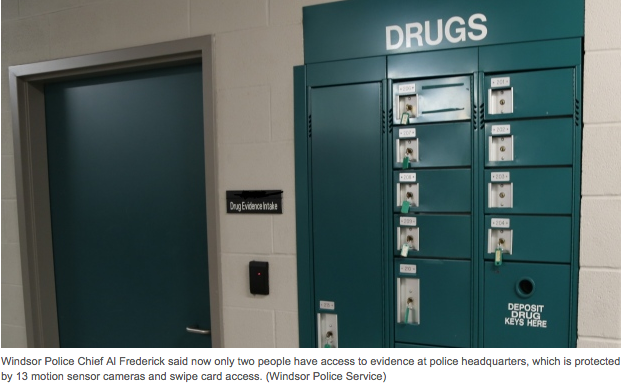 The Ministry of Community Safety and Correctional Services will examine the Windsor police evidence vault following the disappearance of $25,000 in cocaine that chief Al Frederick says was mistakenly destroyed.

The chief requested the visit back in April and said he's "thrilled" experts will be inspecting how the force handles evidence.

"This is not typical. It's going above and beyond," said Frederick, adding he's looking forward to seeing how Windsor police stack up against their provincial counterparts.

Over the years, the vault has housed millions of dollars in evidence. No evidence has ever disappeared — out of 4,500 cases in the past 10 years there have been no missing items, according to Frederick.

Only two people have access to evidence, and the vault is protected by 13 motion sensor cameras and swipe card access.

The chief said the Windsor Police Services Board was alerted to the missing drugs back in 2013, but added he's "100 per cent confident" the drugs were destroyed, not stolen. Frederick is not sure how long it will take for ministry staff to complete their inspection, but said he hopes to have some answers "in a month or so."