The evidence recovered from the storage locker included blood-soaked women's socks, a blanket, rope, hatchet and other items believed to be linked with the Hiltz homicide, which Dodd helped investigate a decade ago. 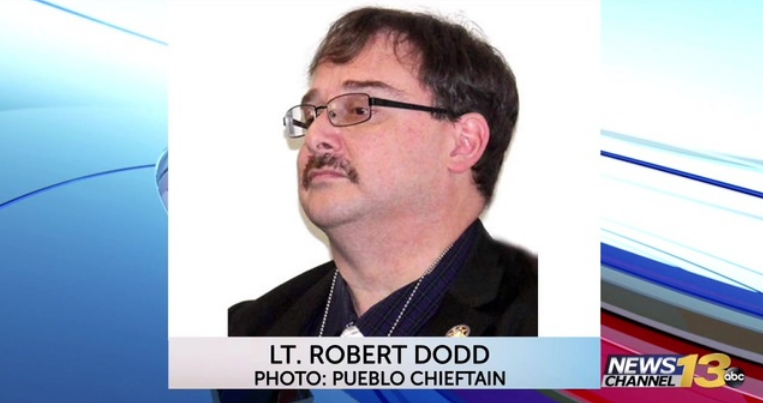 CANON CITY -- Former Fremont County Sheriff Lt. Robert Dodd did not have to appear in county court Tuesday in connection with charges that allege he mishandled criminal evidence connected with a cold case homicide.

Dodd, who is charged with misdemeanor abuse of public records and two counts of second-degree official misconduct, which are petty offenses, was able to get his appearance waived. He was, however, represented by Pueblo attorney Randy Jorgensen.

District Attorney Molly Chilson told Fremont County Judge Norman Cooling that there is an "open, homicide investigation" so she filed for a protection order that would prohibit the sharing of information in connection with that ongoing investigation.

"The protective order relates to the fact that the discovery includes discovery from an open homicide investigation and I asked the court to order that the defense could only use that material for the defense of Dodd's case and cannot further distribute the information," Chilson said following court.

Cooling told Jorgensen to use "only materials to assist in the defense on that particular case and not anything relating to an ancillary (additional) matter."

The charges against Dodd resulted from a months-long Colorado Bureau of Investigation probe after evidence apparently connected to the Aug. 15, 2006, unsolved homicide of Candace Hiltz, 17, was found in a storage locker that once belonged to Dodd. Canon City resident Rick Ratzlaff discovered the evidence after he bought contents of the storage locker at an auction in December.

The evidence recovered from the storage locker included blood-soaked women's socks, a blanket, rope, hatchet and other items believed to be linked with the Hiltz homicide, which Dodd helped investigate a decade ago. Ratzlaff said the unit also held a box of what appeared to be case files.

Fremont County Sheriff Jim Beicker took possession of the evidence and said he turned it over to CBI investigators, who began on Jan. 4 to investigate the discovery. Dodd was on paid administrative leave from Jan. 1 to April 23, at which time he retired his post after more than 25 years with the sheriff's office and moved to Alvin, Texas.

Hiltz died of seven gunshot wounds in her Copper Gulch home 25 miles southwest of Canon City. Her brother, James Hiltz, was considered a person of interest, but no one has ever been charged in connection with her murder.

"This is a total miscarriage of justice. He (Dodd) should have been charged with tampering with evidence and theft from an evidence locker," said Dolores Hiltz, mother of the victim. "My family feels there still is not justice in this case just as there wasn't 10 and a half years ago when I filed a grievance."

Dolores Hiltz said her grievance related to what she believes was mismanagement of the crime scene, including the discovery of evidence left behind at the home where Candace Hiltz was shot. That evidence included a bloody blanket, a shotgun casing and other items, she said.

"I think it is wrong that he does not have to appear in court," Ratzlaff said.

"Clearly, he should be facing felonies. If this was a normal citizen, the district attorney would stack the charges and here we have a law officer getting petty charges," Ratzlaff said.

"That's not right. He is a cop and should be held accountable," Ratzlaff said.

On May 17, more pieces of apparent evidence linked to Dodd were recovered from the Phantom Landfill. Landfill worker Robert Orton reported the evidence came to the landfill in a dumpster that had been at Dodd's former residence.

That apparent evidence -- consisting of numerous videotapes marked as interviews with victims, many of them sex assault victims, a laptop computer and a tackle box marked "FCSO Crime Scene Unit Forensic Lights" -- was collected by District Attorney Investigator Richard Wren. In addition, stacks of paperwork that included crime reports dated 2003 and 2006, some of them signed by Dodd, were recovered.

Dodd is scheduled to appear in court July 17.