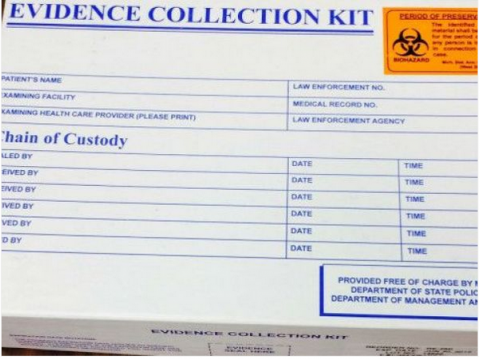 DETROIT, MI — Problems with forgotten rape kits persisted in Detroit after public outcry over more than 11,000 — some of them dating back 30 years — found languishing in a police warehouse in 2009, according to reports. Authorities have confirmed that a second batch was found, but never publicly reported.

The 555 additional rape kits were discovered by workers at an out-of-state laboratory who were processing the original group, Wayne County Assistant Prosecutor Maria Miller told MLive.com. They were collected by Detroit police in 2010 and 2011, but weren't sent for testing until 2015.

Under current procedures, sexual assault kits are sent to the Michigan State Police crime lab for testing, rather than to the out-of-state labs.

"The fact (that) they were not being tested was a result of many different factors," Woody told MLive. "It was not a matter of officers not willing or intentionally neglecting their duty."

No one will face disciplinary action, he added.

The original backlog of 11,341 rape kits resulted in charges against at least one suspected serial rapist, Anthony Thornton, 46, of Port Huron, who is scheduled to go to trial on May 15 on three counts of of first-degree criminal sexual conduct, one count of kidnapping and two counts of unlawful imprisonment. Thornton was arrested in January.

Wayne County Prosecutor Kym Worthy said in a statement at the time that Thornton met his first victim, a lesbian, at a Detroit homeless shelter in April 2010, took her to an abandoned house to drink and smoke, raped her and then helped hold her down as other men at the party took turns raping her.

Nearly a year later, in March 2011, Thornton is accused of raping another woman at a Detroit residence after she had been invited there by a friend The friend wasn't there, and Thornton is accused of overpowering and raping her multiple times, stopping only when he heard someone at the door, giving the victim a chance to break free and report the crime.

Thornton's DNA had been on file in a national database since 2006, the prosecutor's office said.

At the time the charges were filed, Fair Michigan President Dana Nessel said the two cases "illustrate the tragedy of Michigan's failure to quickly process thousands of rape kits in Detroit."

Thornton is among 784 suspected serial rapists identified so far in the testing of the original group of rape kits, Worthy said earlier this month. At the Detroit Policy Conference, the prosecutor said those suspects had committed as many as 15 sexual assaults each. The testing has resulted in 78 convictions so far.

In tests on the new group of 555 sexual assault kits, 135 resulted in DNA profiles that matched samples already on file in a national database, the prosecutor's office said. The others did not have enough evidence to create a DNA profile.

Outside of Detroit, 1,892 untested rape kits were found languishing in police departments across Michigan's 82 counties, Attorney General Bill Schuette said early last year. That number included 261 in both the Flint and Battle Creek police departments, and 239 at the Grand Rapids Police Department.

The problem isn't unique to Detroit and Michigan. Nationally, it is estimated that tens of thousands of rape kits haven't been tested. Exact numbers weren't available, but NPR reported that authorities in Texas located 20,000 kits, Illinois had 4,000 and Ohio had 10,000, some 4,000 of them in Cleveland alone.