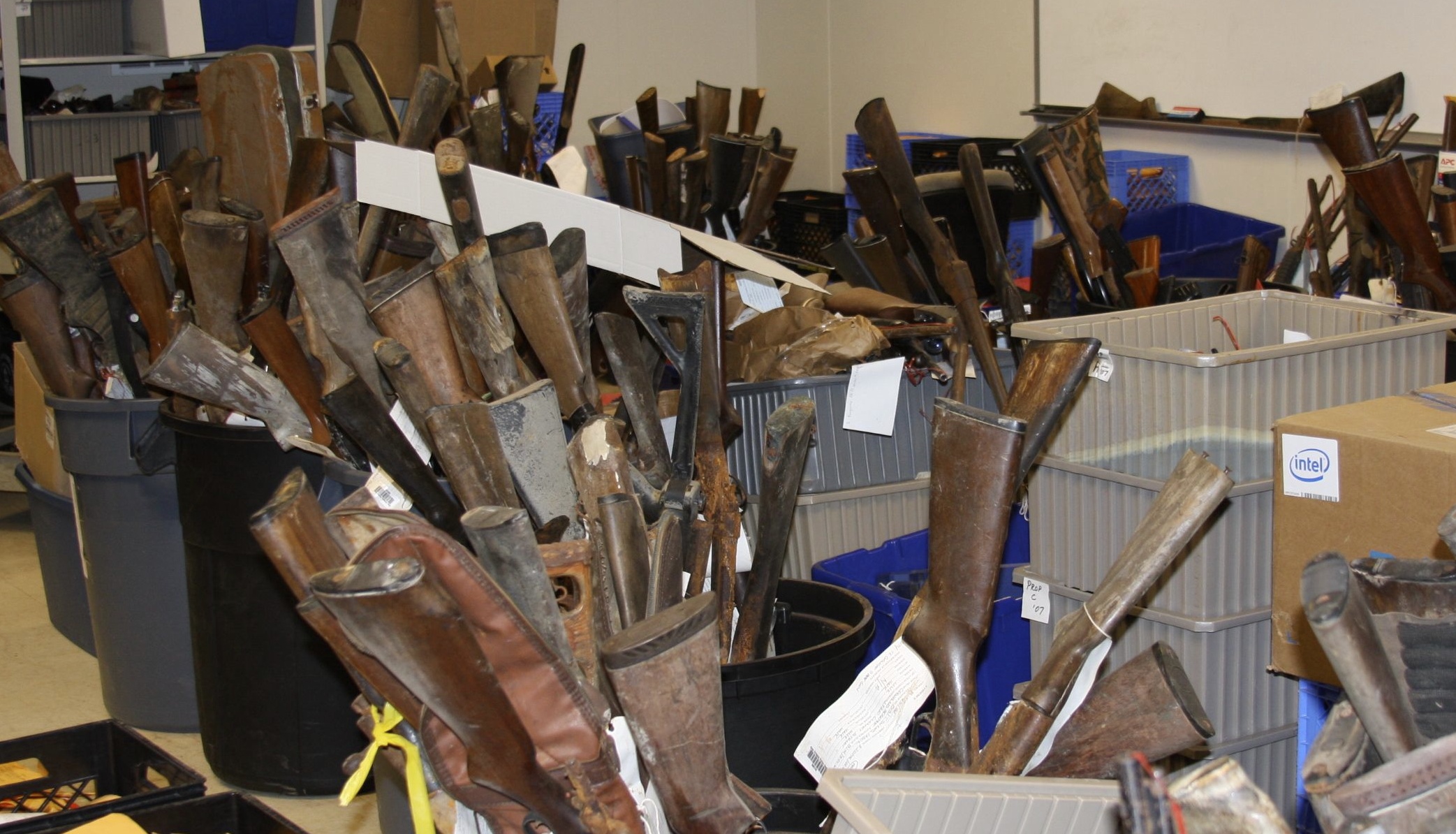 Only deputies – and no managers – were disciplined for the evidence-booking violations, according to newly-released testimony before the Orange County Grand Jury. The testimony, all under oath by current and former sheriff's officials, was part of proceedings in July and August that led the grand jury to indict former deputy Edwin Mora with a felony for filing a false police report. Mora has pleaded not guilty.

More than 30 deputies have been referred for possible charges in the scandal centered on alleged false police reports about evidence that was either booked late or never booked at all. So far, two deputies have pleaded guilty to misdemeanors.

Delays in booking evidence can affect criminal cases by prompting questions about whether the material was contaminated and if prosecutors can verify to courts the evidence is the same as what was collected from a crime scene.

Among the disclosures this summer to a grand jury, made public last week, were:

Former Deputy Bryce Simpson, who was fired and prosecuted in the evidence booking scandal, was among those who testified that supervisors didn't really care about deputies booking evidence late in violation of written policy.

The official policy, Simpson testified, was that evidence had to be booked by the end of your shift.

But it worked differently on the ground, he said.

"At least, as far as you know, was there kind of a de facto or street policy for how it worked?" asked special prosecutor Patrick O'Toole.

"Yes, sir. There was," Simpson replied.

"What was that?" O'Toole asked.

"That book the evidence whenever you get around to it, whenever that may be," Simpson said.

That was echoed by Deputy Tyrone Enriquez, who worked in Stanton from about 2014 to 2018 and booked evidence more than a week late more than a dozen times.

The grand jury, through the prosecutor, asked Enriquez, "Is it the case that the Orange County Sheriff's Department management, while aware of the occasional failure to book evidence at the end of the shift, that this was generally tolerated by said management?"

Asked if any of the supervisors who approved his reports were disciplined, Enriquez replied, "To my knowledge, no."

Another deputy who was fired over missing evidence, Javier Marquez, testified that his supervisors never warned him that not booking evidence or booking late could lead to discipline.

As of earlier this year, no one in management or supervisor roles at the Sheriff's Department had been disciplined for the evidence problems, grand jurors heard.

The grand jurors and prosecutor did not appear to ask why deputies were the only ones disciplined. O'Toole at various points reminded the grand jury their proceedings were about whether to indict Mora with a crime, and that the grand jurors were free to follow up later in their civil role on broader questions about how the department operated.

Asked for comment, Sheriff Don Barnes' office issued a statement saying the department now has training and procedures in place to ensure proper evidence handling. His spokeswoman declined to answer if deputies were accurate in their testimony that there was a culture that emphasized arrests over booking evidence properly, whether supervisors and management knowingly allowed deputies to book evidence late in violation of policy, and why deputies were the only ones disciplined.

"Training on evidence, chain of custody, and booking of evidence is taught repeatedly in both the Basic Academy and in our Field Training Officer program," said the statement, provided by department spokeswoman Carrie Braun.

"In addition, evidence booking protocols and policy now require deputies to include confirmation of the booked evidence in their report, which is then reviewed by a supervisor before being signed off. The department also conducts randomized spot checks every month, pulling reports and cross-referencing the evidence booking system to ensure evidence is booked as documented," the statement continued.

"To date, the spot checks have confirmed that the new protocols are effective and evidence is booked as documented in reports. Both [former Deputy Joseph] Atkinson and Simpson have been terminated by the Orange County Sheriff's Department prior to the Grand Jury testimony."

Don Barnes previously was the department's assistant sheriff, in charge of day-to-day operations, from 2016 until early 2019, a period in which auditors found widespread violations of evidence booking policies by deputies until an audit was conducted in early 2018.

His spokeswoman declined to answer questions about what happened up until 2018 that, according to the deputies' testimony, led to the evidence handling problems.

"Department policy requires deputies to book the evidence collected by the end of their shift," said Braun.

"The information I send you outlined the new procedures put in place for supervisors to ensure that is occurring. That's the extent of the information we will provide at this time."

"AOCDS stands behind the good faith of our deputies," stated the union, the Association of Orange County Deputy Sheriffs.

"Deputies are often required to complete reports in one location, then have to go to another location for the actual booking of evidence, all while responding to emergency calls. This leaves supervisors open discretion for trying to manage many units. We have worked with the department to overhaul evidence booking policies and procedures for deputies and supervisors in order to correct these institutional deficiencies."

The evidence booking scandal was kept secret for about two years by the Sheriff's Department, until news reports last November revealed the department had conducted audits that found widespread late bookings and false statements by several deputies. That prompted District Attorney Todd Spitzer to take another look at cases previously rejected by prosecutors.

In nearly 300 instances, the audits found evidence was booked more than a month late. And in at least 57 cases, a second audit found deputies lied about booking evidence that they did not actually book.

The evidence audits were finished in spring 2018 and February 2019. But the Sheriff's Department didn't disclose it to the Orange County Board of Supervisors or the public until a reporter learned of the reports in November 2019 and contacted the department for comment. On the day the first article ran in the Orange County Register, sheriff's officials first told county supervisors about the audits, noting a news story was coming.

A grand jury, meeting secretly as required by state law, heard testimony in July and early August from 18 witnesses, almost all of whom are current or former sheriff's officials. Under state law, the transcripts were secret until last week, when the law required they be accessible to the public.

An internal sheriff's audit in 2018 found that most deputies booked evidence within policy, but "a large number" were booking later than the "end of your shift" requirement, Lt. Nathan Wilson testified to the grand jury.

"We found that it was not isolated to one particular area. There were areas where you saw a higher volume of late bookings, but it was department-wide that we found this issue occurring," Wilson testified.

Former Assistant Sheriff Bill Baker, who retired earlier this year, testified that executives recognized the evidence-booking delays were a major problem and implemented a series of changes to fix it.

"Did the sheriff's management come to the conclusion that there was a problem, there was a systemic problem, and more needed to be done in this area?" asked O'Toole, the special prosecutor.

The changes included a new policy requiring supervising sergeants to confirm evidence was actually booked before signing off on deputies' reports, he said.

Several deputies testified that the emphasis at sheriff's stations in Stanton and San Clemente was on making lots of arrests, not so much on booking evidence and writing reports that will hold up in court.

"So a lot of emphasis was placed on making high quality arrests, whether it be arresting gang members, arresting people with drugs, possession for sale, finding weapons, and emphasis was placed on making those arrests and then being able to do it again," testified Joseph Atkinson, a former deputy who pleaded guilty to a misdemeanor after sheriff's officials found he made 26 false statements in police reports about whether he booked evidence.