"Someone dropped the ball," Dewey said. 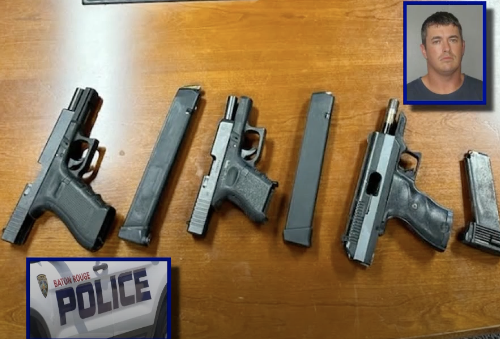 Benjamin Zeringue was arrested Monday charged with injuring public records, malfeasance in office and theft of firearms. He posted an $18,000 bond.

Arrest records show on two different occasions in 2018 and once in 2019, the former officer seized three different firearms during traffic stops.

"In each of the three incidents, the accused turned in a written report falsely claiming the seized firearms were placed into evidence," according to arrest records.

Tommy Dewey is a lawyer and a former officer who retired from BRPD with 20 years of service.

"We tagged our evidence, a lot of times we photo copied it, and kept a copy for yourself," Dewey said. "It was turned in to an evidence mailbox, or evidence room itself and logged in by the evidence custodian."

However, that did not happen. In April, about four years the guns were seized, children playing in Central found three firearms with ammunition in the garbage in front of the former BRPD officer's home.

"We're fortunate it was good kids who had a good mother who called police and allowed Central to take possession of that," Baton Rouge Police Chief Murphy Paul said Monday.

"They did have full magazines, 30 round magazines with them," Corcoran said. "We were just lucky the children didn't put them in the weapons."

Dewey said for evidence to be missing for four years, it shows Zeringue's supervisors were not doing what they should have.

"Someone dropped the ball," Dewey said.