The husband and wife are accused of stealing at least $20,000 in cash from the police evidence room. 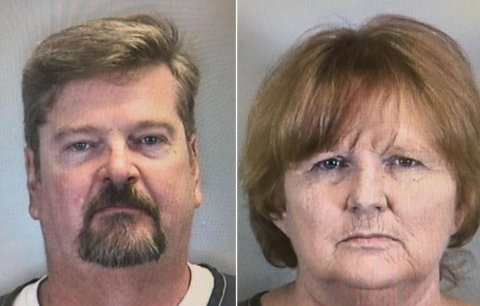 Two former civilian employees of the Bradenton Police Department - a husband and wife - have been accused of stealing at least $20,000 in cash over a five-year period from the department's evidence room.

Several portions of the mammoth 11-month investigation remain open, so the total dollar amount could increase.

Jake and Cynthia Zaagman were both hired by the department in 1983.

Jake Zaagman, who retired in 2015, was the department's civilian administrator. He was in charge of BPD's records management system, its information technology department and the property and evidence sections.

Cynthia Zaagman, who retired in February 2016 - as soon as the investigation was launched - was the department's administrative services and budget coordinator.

"They were trusted employees with supervision of the assets of the department," Bradenton Police Assistant Chief Paul McWade said. "Unfortunately, they took advantage of that."

McWade said that no property - guns, drugs or other items - were taken.

"Jake was in charge of operations. If there's a car seized, either through a narcotics or prostitution arrest, $500 is paid to the city. A lot of money was taken from that," he said. "He was also in charge of taking money to the banks - abandoned money. He was supposed to take it to the bank. Instead, he would steal it." While the FBI assisted Bradenton Police detectives throughout the investigation, the couple now faces state charges - multiple counts of felony "scheming to defraud." The Zaagmans turned themselves in to the Manatee County Jail on Wednesday, and were booked without incident.

Both retained attorneys, McWade said. While Jake Zaagman made some initial statements to investigators in the past, both declined to be interviewed by detectives about the case.

"Collusion by these two employees enabled the thefts to go undiscovered for an extended period of time," a department statement reads. "Jake Zaagman stole currency prior to depositing these funds into the Department's bank account. In turn, Cynthia concealed the thefts by manipulating the internal financial documentation."

The financial discrepancies were discovered during an internal audit by BPD's Office of Professional Standards.

"This was a complex investigation involving technical and forensic analysis of the suspects' financial records, personnel purchases, lifestyle habits, and departmental computer use," the statement says. "With the assistance of the Federal Bureau of Investigation, over a decade of financial accounts, bookkeeping methods, and property and evidence funds and articles were audited for potential thefts."

Word of the internal investigation leaked out last September, by political candidates vying for office, which prompted Bevan to issue a scathing press release.

"This investigation was initiated before the onset of our local political season, and will proceed in due course and in accordance with all Rules of Law until such time the matter is brought before the Court," Bevan wrote at the time. "Transparency stands as one of BPD's Organizational Values, and I am certain that upon release of all details surrounding this investigation, our citizens will maintain their confidence in BPD as a competent, full-service police agency that stands ready to serve its community."

Investigators say the couple's crimes did not "impact or compromise" any criminal investigation by Bradenton Police, "past or present."