A 22-year veteran of the Ventura County Sheriff's Office was suspended in May after he was suspected of taking prescription medication from the
drop-off disposal bin at the agency's Thousand Oaks headquarters, officials said Tuesday in a news release. 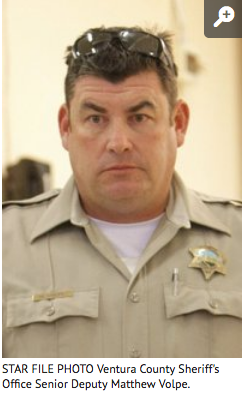 A 22-year veteran of the Ventura County Sheriff's Office was suspended in May after he was suspected of taking prescription medication from the drop-off disposal bin at the agency's Thousand Oaks headquarters, officials said Tuesday in a news release.

An investigation into Senior Deputy Matthew Volpe, 45, of Agoura Hills, began in early May when a sheriff's employee who regularly empties the bin noticed a disparity in the amount of medication compared to the day before, the Ventura County Sheriff's Office said.

The employee notified sheriff's investigators of the incident. Investigators looked at surveillance footage from the East Valley station's lobby on Olsen Road, where the bin was located, and saw someone wearing a sheriff's office uniform use a key to unlock the bottom of the bin and remove items, authorities said. The person on camera was identified as Volpe, who was assigned to the Thousand Oaks police motor unit, officials said.

Evidence collected in the investigation by the sheriff's major crimes unit was turned over to the Ventura County District Attorney's Office Tuesday for review and consideration of filing criminal charges of embezzlement and possession of a controlled substance, authorities said.

Volpe has not been arrested but has been questioned by sheriff's investigators, officials said.

Sheriff's Internal Affairs investigators have launched an administrative investigation which could lead to Volpe's termination, authorities said. He has been on paid administrative leave since May.

The administrative investigation is separate from any criminal prosecution Volpe could face if the District Attorney's Office files criminal charges, officials said.

"I am incredibly disappointed that one of our deputies would abuse his authority and the trust placed in him. His actions bring dishonor to the badge worn proudly and honorably by so many," said Sheriff Geoff Dean in the news release.

Multiple interviews were conducted and additional surveillance footage obtained during the investigation shows Volpe removed items from the bin five more times between April 12 and May 6, authorities said.

Investigators say Volpe allegedly accessed the bin early in the morning when staffing at the station was at a minimum and he allegedly took the key from inside the desk of the employee assigned to empty the bin.

Sheriff's spokesman Capt. Garo Kuredjian said that employee and a supervisor were the only people at the station with a key to the bin. The supervisor kept the key in a locked box inside their office, Kuredjian said.

In 2009, the Sheriff's Office began to provide residents a safe place to get rid of unwanted or expired pharmaceutical medication by placing the drop-off bins at each of the agency's six stations throughout the county. Officials said it was not known what Volpe allegedly removed since residents are not required to list what they drop off.

Additional safeguards, such as securing the bins' keys, have been put in place since the incident, Kuredjian said. The keyholder is also required to have another sheriff's employee with them while the bin is being emptied, he said.