Will California stop police from taking people's property without a criminal conviction?

The practice, known as civil asset forfeiture, gained currency during the height of the drug war in the 1980s as a way for law enforce ment to financially cripple drug lords and fund anti-narcotics operations. But
advocates for reforming the laws say too often police officers ensnare innocent residents who are poor and have few resources to ensure their property is returned. 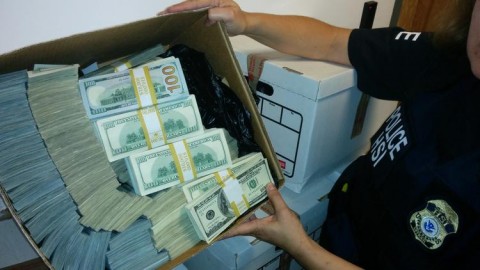 Almost a year after California lawmakers rejected legislation that would restrict police departments' ability to take cars, cash, homes and other property from suspected criminals without a conviction, the bill's author is trying again as similar efforts succeed across the country.

The practice, known as civil asset forfeiture, gained currency during the height of the drug war in the 1980s as a way for law enforcement to financially cripple drug lords and fund anti-narcotics operations. But advocates for reforming the laws say too often police officers ensnare innocent residents who are poor and have few resources to ensure their property is returned.

A bill from state Sen. Holly Mitchell (D-Los Angeles) would require state and local police to get a criminal conviction before taking people's money or other assets.

"There are some innocent people whose assets have been forfeited, and there are some of us who feel that's unacceptable," Mitchell said.

Lawmakers in Maryland, Nebraska, New Mexico and Washington, D.C., have already taken similarly strong steps to rein in civil forfeiture in recent years, along with a number of other states that have tightened their own guidelines. Behind these efforts is an unlikely coalition of supporters including labor and civil rights groups as well as conservative and libertarian organizations concerned about property rights.

Mitchell, considered one of the most liberal members of the Legislature, said she couldn't think of another issue that aligned her with billionaire Republican donor Charles Koch, who is an opponent of asset forfeiture.

At its core, SB 443 sends basically a message to drug dealers that the cost of doing business has gone down. — Gregory Totten, Ventura County district attorney

On the other side of Mitchell's push are law enforcement groups who are sounding an alarm about their ability to target high-level drug dealers should the bill pass. After sailing through the state Senate and the Assembly's public safety and appropriations committees, Mitchell's bill landed with a thud on the Assembly floor last September, falling 17 votes short of passage.

Before that vote, nearly every district attorney in the state signed a letter against the measure. Numerous police chiefs and sheriffs did the same.

Now, Mitchell is bringing back the bill for another try in the Assembly with few substantive changes, arguing that requiring a criminal conviction before an asset gets taken is the right policy. Law enforcement opposition to the bill, SB 443, remains just as strong as last year.

"At its core, SB 443 sends basically a message to drug dealers that the cost of doing business has gone down," Ventura County Dist. Atty. Gregory Totten said.

Last month, the state chapter of the American Civil Liberties Union released a report that included stories of Californians who said they had a few thousand dollars or cars seized while they were leaving work, or when they bought a car from a friend. The Drug Policy Alliance, a nonprofit that advocates for decriminalization of drugs, hired a pollster who found that 10% of residents in Los Angeles, Riverside and San Bernardino counties knew someone who had lost property to law enforcement without first being convicted of a crime.

By contrast, law enforcement groups say the practice is an essential tool in combating drug trafficking. When police arrest low-level cartel members with large sums of money in their cars, the driver isn't the primary target, Totten said.

"In many, many narcotics trafficking cases, we're not able to actually identify some of the higher-ups in the organization whose money we're seizing," he said. "That's just the nature of illicit drug trafficking."

David Hadley, a Republican assemblyman from Manhattan Beach and a coauthor of Mitchell's bill, said law enforcement is fighting hard against changes to the civil forfeiture process because of the hit to their budgets. It's on the Legislature, he said, to boost funding for public safety so that police don't have to rely on taking people's property to pay for what they need.

"When you get outside of [the Capitol] you get a general consensus that something like this in its broad form should not be happening in the United States," Hadley said.

No one disputes, however, that civil forfeiture provides significant money to police budgets.

In 2015, California police departments received $86 million in civil forfeiture dollars from the federal government, which distributes 80% of the proceeds from joint task forces involving federal agents and state and local police back to localities.Mitchell's bill primarily goes after California police departments' ability to get money from the federal government, which allows state and local law enforcement to conduct forfeitures. Currently, federal officials don't require a conviction to take a person's assets, only a civil case with a lower burden of proof. Federal officials have told state law enforcement groups that since the federal government doesn't track criminal convictions, California police might no longer be able to get paid for participating in task forces, which could effectively end them.Mitchell's office said it had received assurances from the Justice Department that the bill would not conflict with federal guidelines. The federal government's current regulations, Mitchell said, are no reason to continue the current situation."That's like the IRS saying we don't have the computer-based system to return your tax return, Ms. Mitchell, so we don't have to," she said. "The Department of Justice is going to have to figure it out. That's ridiculous."A Justice Department spokesman declined to comment on Mitchell's bill, but said the agency had no plans to change its rules should the measure pass.Mitchell won't say when she plans to bring her bill up for another vote before the Legislature adjourns on Aug. 31. "We're coming up against pretty big guns, figuratively and literally," she said. "And I'm acutely aware of that."