May 20 Posted by Joe Latta in Texas

"There's not an evidence room in this town that has not had problems holding onto their evidence," he said. "It happens probably more than we know." 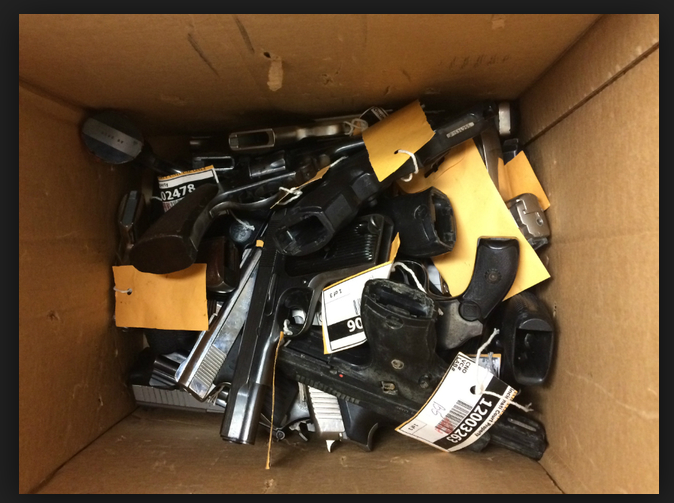 A worker stumbled across a box of guns and money sitting with the trash on Thursday at the Harris County courthouse, where a would-be thief apparently ditched the stash of decade-old evidence while trying to steal it.

The Harris County Criminal Justice Center has been closed to the public since Hurricane Harvey, officials said, and it's not immediately clear what court the weapons came from, why it was believed to be a theft attempt, or whether other evidence may be missing as well.

"This is like a Bizarro World Watergate, if you have something like a burglary that ends up as much more than that," said criminal defense attorney Murray Newman. "If the integrity of where they're storing evidence is compromised that could have a lot of ramifications down the road."

Word of the mishap emerged this week when a Harris County District Attorney's Office wrote the court administrator admitting that an investigator had accidentally searched a restricted area on the wrong floor without permission.

The email goes on to explain that the investigators initially thought the box had last been seen on the 7th floor, but in fact had been spotted on the 17th floor.

"Had that information been better communicated to us, we would never have looked for the box on the 7th floor at all," Clappart wrote. "There was also a misunderstanding about the restricted status of the 7th floor. The investigators sent to investigate were unaware at that time that the 7th floor was restricted space dedicated to your staff."

In the end, investigators only located the box - containing eight handguns and ammunition - once someone else turned it into Facilities and Property Management at 1310 Prairie. Its contents had been tagged as exhibits in old trials.

"It was the exigency of the situation - an unsecured box of weapons and money, with the possibility that people were looting the courthouse - that compelled us to act quickly," the letter continues. "In the aftermath, the District Attorney has made it very clear to us that, in the future, we will consult with and receive permission from her leadership team before initiating this kind of investigation."

A day after the weapons were found, there are still few answers about where they came from.

The District Courts Administrator and Precinct 1 Constables Office - which oversees courthouse complex security - did not immediately respond to a request for comment.

"It is likely that if the items found in the boxes are tied to any recent or pending cases that they were left behind by the court reporter maintaining possession while a case is going," Daniel said.

It's not clear why the guns were still in the courthouse since the district attorney's office said in a statement that they were from cases "going back decades."

Alex Bunin, who heads up the Harris County Public Defender's Office, was unsurprised to hear about the out-of-place weapons.

"There's not an evidence room in this town that has not had problems holding onto their evidence," he said. "It happens probably more than we know."