Edmonton police announced they had made the largest fentanyl pill seizure in Canadian history. 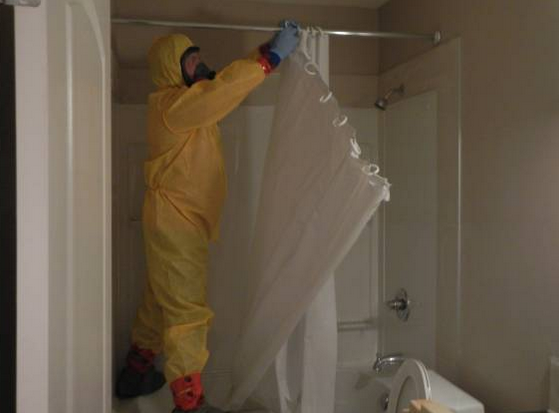 Dean May, owner and president of Mayken Hazmat Solutions, said his Calgary-based hazardous cleaning and remediation company got the contract to clean up the house at 306-26023 Township Road 544 roughly three weeks ago. He and two other team members arrived on site last Monday.

"Downstairs in the basement, where they were actually preparing the product and pressing the pills… there was green powder, green dust all over everything in the basement," he said, adding the countertops and bathroom were covered in dust.

In addition to debris like air mattresses, work benches and collapsible tables, May said his team found drug paraphernalia, such as mixing containers, mason jars with residue inside and even some pills.

In July, Edmonton police announced they had made the largest fentanyl pill seizure in Canadian history. Search warrants were conducted at four houses, including the one in Sturgeon County that housed the pill processing lab.

In total, the Edmonton Drug and Gang Enforcement Unit seized 130,000 fentanyl pills with an estimated street value of $3.9 million, 2.4 kilograms of cocaine and 1.8 kilograms of methamphetamine along with two pill presses capable of each pressing out 5,000 pills an hour and four cement mixers believed to mix fentanyl powder with buffing and cutting agents.

The operation was called "complex" and "innovative" by the RCMP Federal Clandestine Laboratory Enforcement and Response Team.

Fentanyl is a deadly opioid and a couple of grains can be lethal. May said his team takes precautions to keep themselves safe.

"We put double suits on. We put double rubber gloves on. We've got our rubber boots. We put booties on over top of those and we tape ourselves in at all the seams," he said, adding his team also wears full-face respirators.

There were also naloxone kits on-site in case someone got exposed. He said naloxone, the antidote to fentanyl, did not have to be used during the week-and-a-half long clean-up.

After arriving at the site, May and his team vacuumed up all the dust, then they cleaned and threw out the furniture, washed the walls, removed carpet and neutralized the fentanyl.

When asked if he gets concerned about the type of environment he walks into, May said it is now his new normal.

"The first one that I [was] in… it raises your senses a little bit. Maybe I've become desensitized to it a little bit now. It's just putting on my suit and going to work now," he said.

He admits that it can be difficult to persuade people that a former drug lab is now safe for human habitation.

"Everybody's got their misgivings about it. It's my opinion that when me and my team walk away from these properties, that it's totally safe, totally liveable," he said.

"I would move my family into it. I would bring my grandchildren into it."

The company used to get calls to clean up drug labs once a month or once every two months; May said that they now tackle two a month. Drug labs used to make up 10 per cent of his business; they now make up 40 per cent.

The property manager confirmed Mayken Hazmat Solutions is responsible for the cleanup and said he did not know when the property would be safe to inhabit, deferring those questions to Alberta Health Services (AHS). He declined to answer other questions about who was renting the house.

"This ensures that our next steps happen in collaboration with the owner, when the owner feels ready," AHS said in a statement to Global News.

"At this time, our department is awaiting a new inspection request from this particular property owner. Once that request is received, EPH staff will review the reports related to the cleaning and repair of the property, and conduct inspections in partnership with safety code officers and other relevant agencies, to determine if the outstanding issues have been addressed.

"Once AHS determines the work completed is in compliance with health and safety standards and the property is fit for human habitation, the executive officer's orders will be lifted."

Edmonton Police Service said charges in the case are still pending and under investigation.