The discovery was made by the new sheriff, who's pointing the finger at former Sheriff Joey Dobson for losing nearly a dozen weapons, saying shoddy record keeping is to blame. 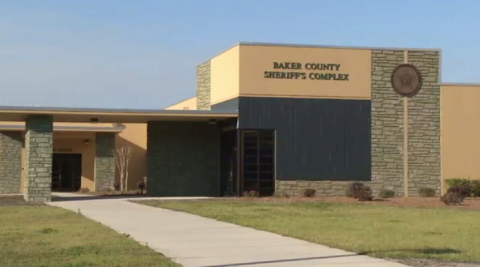 The discovery was made by the new sheriff, who's pointing the finger at former Sheriff Joey Dobson for losing nearly a dozen weapons, saying shoddy record keeping is to blame.

The Baker County Sheriff's Office has since requested that the Florida Department of Law Enforcement to oversee the inventory room.

On Thursday, the FDLE wrapped up the second its two-day investigation. The conclusion points to several firearms not having case numbers and improper storing of firearms and ammunition.

And that's just part of what Rhoden told News4Jax that he noticed when he took office in January.

According to Rhoden, a separate in-house review conducted in January showed that 11 firearms were missing and that 19 firearms were located, but there was no documentation found for them.

In a February memo written by Capt. Michael Crews -- who works in the Sheriff's Office administration -- to Rhoden, he explains some of the inaccuracies that he found with the "weapon inventory," saying, in part, "The records were incomplete with no sense of organization or sequential order. For example, inventory documents indicated that specific weapons were assigned to the armory or specific officers, yet verification revealed otherwise."

The letter goes on to say that armory security was of concern.

"Numerous staff had keys with no verification process in place to ensure accountability or inventory control," Crews wrote.

Since the current inventory was inaccurate and unreliable, Rhoden said, the Sheriff's Office called on the FDLE to help.

Rhoden said it is unknown at this time where the missing guns.

"We did enter them into the computer as lost, not stolen. The previous administration, they did give weapons away as a retirement gifts," Rhoden said. "We have exhausted everything we know to do to trying to find these weapons."

Rhoden said a weapon inventory has been created and it shows who is assigned and responsible for every weapon.

Crews and the property supervisor, who will conduct audits annually and at random, are now the only ones with access to the inventory, Rhoden said.

"During my tenure as Sheriff, we had policies governing how our evidence was submitted and stored. These policies met the State of Florida's Accreditation Standards. Our evidence policies and practices were audited, including an audit of our evidence room, during the accreditation process, and no discrepancies were discovered. I can only speak to conditions and property as it was before January 3, 2017 at midnight. "As Sheriff, I assigned personnel to be responsible for the evidence function, as well as supervisory oversight of this function. Sample audits were conducted on a regular basis of our evidence room, and I was never informed of any discrepancies or missing property from these audits. "During my tenure, evidence room access was limited to the employee responsible for the evidence function and that person's immediate supervisor. Both of these employees performed their duties with the utmost accuracy and integrity, garnering praise from both the Accreditation Team and FDLE. "I have read the recent report finding minor deficiencies and suggesting improvements, while noting the evidence custodian's knowledge in her position and the organized way in which the room has been maintained. "The unlabeled drugs were acquired through JSO to be used in training canines and were stored in the evidence room. It is my understanding the drugs have been destroyed, as they were no longer needed for that purpose. "While Sheriff, I made it a practice, allowed by law, to give as a gift, to officially retiring law enforcement deputies, their agency assigned firearm. It is possible that these retiree guns were either not properly documented or removed from the official inventory, as they were never turned back in. For instance, Major Gerald Gonzalez, Major John Finley, and myself were allowed to keep our agency issued firearm following our recent retirement. It is possible the records are not reflecting the guns kept by the retirees. "I am convinced, without a doubt, there have been no "thefts" of agency firearms. "I will always believe because of the training afforded our employees and the standards we met, during my tenure, we had one of the most professional and progressive law enforcement agencies in the State of Florida."