We never gave up on Siobhan or finding justice for her 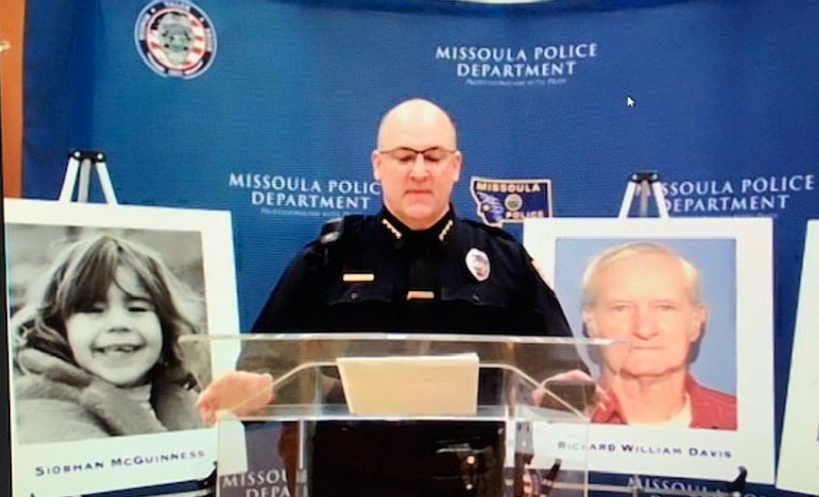 The case of Siobhan McGuinness' murder has gone unsolved until now.

At a ZOOM press conference in Missoula, City Police Chief Jaeson White, Missoula County Undersheriff Rich Maricelli, Montana Attorney General Tim Fox and Missoula Legislator Kimberly Dudik, along with two members of Siobhan's family, her father Stephen and her half-sister Oona all spoke about the closure of the case.

"On February 5 1974, five year old Siobhan McGinnis was abducted within a few blocks of her Northside neighborhood home. Tragically, two days later, she was found deceased near the exit of Interstate 90. Despite all of the exhaustive hours by detectives over the past four decades, the case has remained unsolved," said Chief White. "Through modern DNA technology and assistance from state and federal law enforcement partners, the cold case squad was able to identify a suspect. The suspect has been identified as Richard William Davis. Suspect Davis was born on November 7 1941, and most recently resided in Cabot Arkansas. Suspect Davis died in 2012."

Several agencies, including the FBI, the Missoula Sheriff's Office Cold Case Division, and multiple DNA investigators helped to identify Davis as the killer.

"To all of our friends, both Bonnie's and mine in Missoula, Missoula Police Department detective division, especially Detective Dean Chrestenson; 46 years is a very long space of time to be in a state of unending grief and immense sorrow for what is beautiful and amazing as Siobhan," said McGuinness. "I'm sure she has been alive in our memory all these years, and still continues today."

Siobhan's half-sister Oona asked for the public to honor the privacy of Davis' family, since they too are suffering through this revelation.

"The family of the suspect are very, very, very, very kind people," said McGuinness. "They did not have to cooperate or care about these things, but they were willing to do this for us and they have reached out to us. They sent a very lovely statement to our family from theirs and they are also experiencing their own new family tragedy."

Chief White offered these words to the family of the murdered child.

"To the family of Siobhan, I offer my heartfelt condolences for the tragic loss of your loved one," he said. "Undoubtedly the past 46 years have been a difficult journey. The news of identifying a suspect in Siobhon's death has brought many emotions, memories and feelings about that day, back to the surface. We never gave up on Siobhan or finding justice for her. While we are unable to bring the suspect to justice for his crimes, we hope his identification can help bring a small amount of closure to you and hopefully help you continue to heal."