A former state police sergeant in charge of a post's evidence room is accused of stealing nearly $10,000 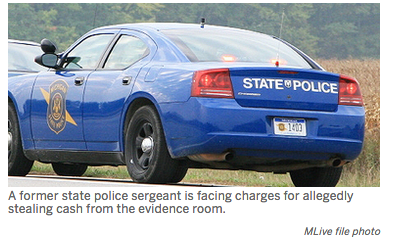 Malcolm Lindsey Irwin, 52, of Cadillac, had financial problems and a gambling problem when the money was taken, a felony complaint says.

Police said that $9,600 was reported missing on March 18, 2014, from the evidence room at the state police post in Wexford County.

Detectives from the Sixth District Special Investigation Unit determined that the money had been stolen, Cooney said.

Investigators presented the case to the Wexford County prosecutor who asked the state Attorney General's Office to appoint a special prosecutor because of a conflict of interest.

Police learned that the money was missing when a detective, Greg Hubers, showed up at the Cadillac post to obtain evidence – the $9,600 – for one of his cases.

Hubers said the sergeant acted suspiciously from the start.

He said that Irwin took an inordinate amount of time to meet him at the property room. When he finally showed up, Irwin said he forgot access information for the computer, court records showed.

Irwin obtained that information in another area of the post. He then opened the wrong drawer of the cabinet containing the money.

The detective noted Irwin's "exaggerated physical response when he 'noticed' that no money was present in the cash drawer."

The former sergeant offered no possible explanations but twice asked the detective to keep quiet for the time being, a felony complaint said.

The detective immediately told a lieutenant.

After the money was reported missing, a state police sergeant recalled that Irwin had hidden keys to the cash drawer in the evidence room when Irwin went on vacation in January 2014.

Irwin did not tell anyone where he hid the keys before he left on vacation, Sgt. Scott Bates is expected to testify.

Lt. Rob Davis determined that Irwin had a serious gambling problem, the complaint said.
"As Lt. Davis began looking into the people who held keys to this room, he will state that his investigation pointed towards (Irwin)," the complaint said.

"This focus was due to, in addition to the behavior described above and other factors: Defendant being the primary person responsible for funds being held in the property room, serious financial difficulties Defendant was experiencing around the time of the theft, and a documented issue that Defendant had with gambling."