Wisconsin received the two largest grants in the country to locate and address untested kits in hospitals and law enforcement agencies across
the state, Schimel said. The DOJ announced the receipt of $4 million in grants in September 2015 to inventory the untested kits. 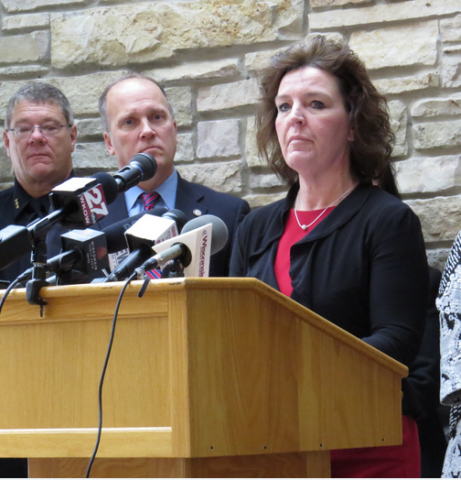 In an attempt to curb the backlog of an estimated 6,000 untested sexual assault kits, Wisconsin Attorney General Brad Schimel introduced the "By Your Side" campaign in a Monday news conference at the Madison Olbrich Botanical Garden.

The campaign promotes the ability of sexual assault survivors to decide whether or not to have their kits tested and to more easily access information about the kits, Schimel said. The Wisconsin Coalition Against Sexual Assault and Wisconsin Department of Justice collaborated with the attorney general's office to develop the campaign.

Wisconsin received the two largest grants in the country to locate and address untested kits in hospitals and law enforcement agencies across the state, Schimel said. The DOJ announced the receipt of $4 million in grants in September 2015 to inventory the untested kits.

"We received the largest grants because we had a unique plan for addressing the untested kits," he said.

Schimel stressed a victim-first approach to taking care of the backlog. With the advice of sexual assault survivor advocates, they decided to have victims make the choice about getting kits tested.

The kits are normally kept for 10 years, Schimel said, at which point a potential case exceeds the statute of limitations and the victim can no longer pursue judicial action.

Schimel acknowledged the difficulty of making the decision to seek help from the criminal justice system. He said sexual assault examinations can be "very personal," "sometimes invasive" and "very disempowering" for victims, Schimel said.

"The last thing we want to do is further disempower them by giving them no choice as to what happens with the evidence that's collected from their [bodies]," Schimel said.

Other jurisdictions have taken the "forklift approach," as Schimel called it, by testing every kit received.

This victim-centered approach came together through the efforts of the statewide Sexual Assault Response Team, comprised of law enforcement, prosecutors, victim advocates, hospitals, forensic scientists and other experts, Schimel said.

"This sexual assault response team in Wisconsin is the first of its kind in the nation," Schimel said. "Everyone on this team has the desire to help and support survivors and hold perpetrators responsible."

Schimel said the DOJ and other partners hope to communicate to survivors a message of support and empowerment with procedures ensuring this type of backlog does not persist.

The first step is allowing victims who receive a forensic medical exam to have it stored for 10 years, unless they request it be destroyed.

"Through a standard form developed by this team and provided at the time of the exam, victims will be given the support and guidance to decide whether to involve the criminal justice system," Schimel said.

"WCASA has been working with [the sexual assault response team] since 2012 to address the lack of standardization procedures for handling rape kits," Meyers said. "It is important to remember that behind each kit is a sexual assault survivor. Thus we have approached this daunting task in a trauma-informed, victim-centered manner from the very beginning."

Meyers said Wisconsin is not the only state with these backlogs, Meyers said. A nationwide open records investigation revealed at least 70,000 neglected kits across the country, according to USA TODAY.

Lisa Penterman, a WCASA board director, survivor of sexual assault and advocate for ending sexual violence, encouraged survivors to reach out to trained professionals and people they trust, reminding them they are not alone.

Schimel said though they run the risk of potentially missing some serial criminal behavior by employing this approach, they are willing to take that risk to empower victims.

"The By Your Side campaign is there for survivors of sexual assault, and there are people who are available to provide support," Schimel said.