BELOIT - CPES Beloit Police Evidence Technician Karen Thorson will be saying goodbye to the guns and drugs she tended to for 32 years. 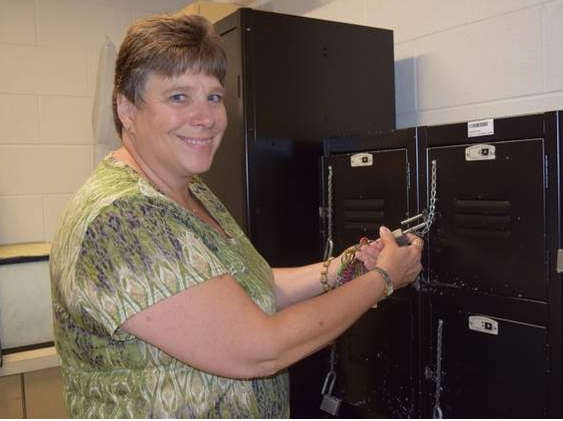 BELOIT - Beloit Police Evidence Technician Karen Thorson will be saying goodbye to the guns and drugs she tended to for 32 years.

Her last day will be July 28, followed by her official retirement date of July 29. She said started in the department on July 29, 1985.

Thorson said she will miss the many friends she made at the department, although she is looking forward to a new chapter to do some traveling and volunteer work.

Thorson started working in vehicle maintenance at the department where she would gas up and paint the stripes on the cars. She later moved to the position of evidence technician, archiving all of the guns, drugs, bloody clothes and other items taken in by the department.

She explained how drugs, guns and money have to stay at the department until the court case is finished. After she obtains authorization, she can either return the items to the owners, destroy it if it's contraband or can auction it off if it's something unwanted. However, in homicide cases the evidence will remain with the department forever.

With a triangle shaped room and one private building in the community, evidence collecting can be a bit claustrophobic.

"We squeeze and purge when we can," she added.

Next week, Thorson explained the department is installing a new HVAC system to help ventilate the space. At times, it has emitted an array of odors with the growing collection of marijuana and bloody clothing.

The most bizarre item she ever archived was an ear. During a domestic call, she said one guy got shot in the crotch and retaliated with an ear bite. The ear arrived in a jar of formaldehyde and was kept in the freezer. After the case was finished, the man asked for it back and got it returned to him.

In addition to drugs and guns, there was growing amounts of clothing and bedding from sexual assaults. The most common item, however, has always been photos. In the future the photos may be moved to the cloud and accessed on computers to save space.

Although most of her time was spent archiving, Thorson always made time to chat with her coworkers and was a bit of a social butterfly. Her and many of the other women in the department went to movie nights together or just shared inside jokes.

Once retired, Thorson won't be letting any grass grow under her feet. She's been active for years in Beloit Junior Women's Club and volunteers to deliver meals for Meals on Wheels. She's also considering offering in-house communion through her church. She and her husband also have plans to travel and visit family.

Thorson said she will be tending her large yard, two dogs and four cats and "being a pool boy" for her sister when not having her "girl time" with former employees. She said she's welcome to visit the department any time, and will be glad to keep tabs on her pals.

Thorson said the department is advertising for two part-time people for her job. Richard Johansen, works part-time as other evidence technician.

Thorson and Johansen have come full circle together. He was her boss when she first started in maintenance. He retired as a captain and later came back to work in training and eventually in evidence collection with Thorson.

BELOIT - Beloit Police Evidence Technician Karen Thorson will be saying goodbye to the guns and drugs she tend
http://www.beloitdailynews.com/article/20170707/ARTICLE/170709916
Tweet
How do you feel about this post?
Happy (0)
Love (0)
Surprised (0)
Sad (0)
Angry (0)
Tags:
assault  kits Chain of Custody Big Three: altered evidence
The cop who said he Od'd by touching fentanyl is p...
Former OSP tech arrested again, police say stole t...
Comment for this post has been locked by admin.