The big break in the case came when police in Arizona used familial DNA testing to identify a possible suspect in a rape case in Flagstaff that investigators believed was committed by the same man nine months earlier. 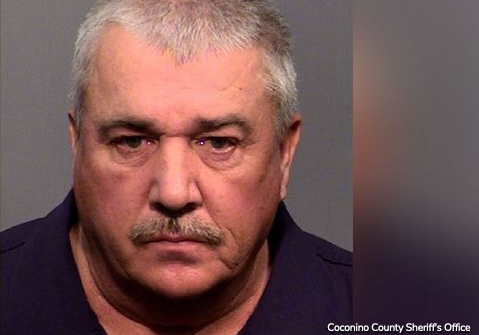 The big break in the case came when police in Arizona used familial DNA testing to identify a possible suspect in a rape case in Flagstaff that investigators believed was committed by the same man nine months earlier.

On July 9, 2004, a woman was in her apartment when her boyfriend left for work about 6 a.m., according to the charging documents. Shortly after, she heard a noise at her bedroom door and thought it was her boyfriend. But when she got to the door, it was someone else who forced his way in, the charges state.

"Be quiet, I won't hurt you," the man told her, according to the charges.

The man then raped and sexually assaulted the woman. When he asked her how old she was, she told him 17, the charges state.

When he was done, the man told her to "stay in bed and not call the police for an hour, and that he would be sitting in his truck nearby and would come back if she called police," according to charging documents.

When police were called, they collected several pieces of evidence including DNA off of a washcloth, the charges state. The DNA was put into the FBI's Combined DNA Index System (CODIS), a national database that stores the DNA of offenders and missing people.

Meanwhile, authorities in Coconino County, Arizona, were also investigating an alleged sexual assault in Flagstaff that happened on April 30, 2003. In that case, an 18-year-old woman was watching a movie with her boyfriend before going to bed. Sometime later, an unknown man entered her bedroom and sexually assaulted her, the charges state. During the assault, the man asked the woman how old she was, according to the charges.

Then in March 2019, a detective with the Coconino County Sheriff's Office in Arizona "requested familial DNA testing, investigating whether an individual related to the suspect had DNA entered into the system," the charges state.

Coconino County Sheriff's Sgt. Jason Lurkins told the Arizona Daily Sun in 2020 that the search for family members by the crime lab in Arizona was "imperative" in the case.

The results from those tests provided police with the identities of two people. From there, the investigators used open-source genealogy to find a suspect, the newspaper reported.

"(The detective) began to look into family members of the identified individuals. The investigation began to focus on David Louis Slade because he was a registered sex offender and his DNA was not on file with the convicted offender database," according to the charges.

Slade's height and weight was also similar to the descriptions given by the victims in the Cedar City and Flagstaff cases of their assailants.

The Arizona detective obtained a new DNA sample from Slade in December 2019 which matched with the two outstanding cases, the charges state.

A DNA sample from Slade was then sent to the Utah State Crime Lab where comparisons were made with the washcloth collected from the Cedar City incident, according to the charges. Those comparisons also provided a match.

The Arizona Daily Sun reported that Slade worked as a truck driver for 14 years before being arrested on Jan. 2, 2020 and later charged in Arizona with four counts of sexual assault. He pleaded not guilty in January 2020.

A truck driver in Arizona already charged with sexually assaulting a woman in Flagstaff in 2003 is now charged with raping a woman in Cedar City several months later.
https://www.ksl.com/article/50159605/arizona-man-charged-in-connection-with-cold-case-rape-in-cedar-city-thanks-to-familial-dna
Tweet
How do you feel about this post?
Happy (0)
Love (0)
Surprised (0)
Sad (0)
Angry (0)
Tags:
could case rape cold case murder
Arrest made in 1983 cold case murder in Montgomery...
Brothers wrongfully convicted of rape and murder g...