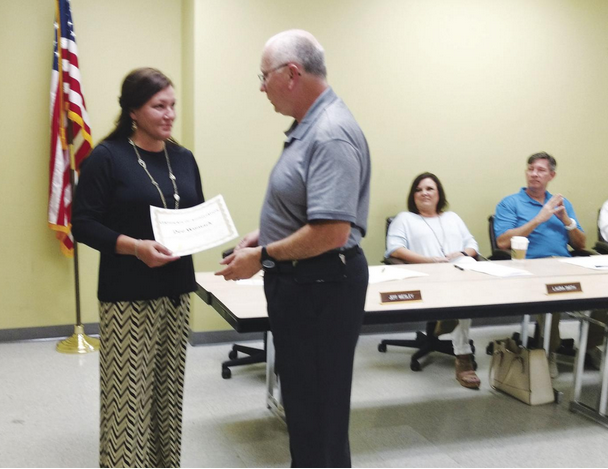 DENHAM SPRINGS – A Denham Springs police officer was called to the City Council meeting on Monday under false pretenses, but there was nothing shady going on.

Dee Womack, evidence control officer for the city police, received a letter of appreciation from the City Council and mayor for her work re-organizing the evidence room and maintaining all the required records.

"I have an issue with the Police Department," Councilman Jeff Wesley said in opening his comments.

Wesley said he recently had the occasion to see the evidence room.

"The evidence room can be the Achille's heel of a police department," said Wesley, who spent 20 years with the city police including time as its chief.

Property brought to an evidence room can include items from an investigation, property seized or confiscated and material found by officers on patrol, he said,

Some of these items are required to be kept "a lifetime" in evidence control, he said.

Not only does the item have to be physically stored, but it must be recorded and those records must be maintained accurately.

"We're have good evidence officers in the past, but what I saw impressed me. You did an impressive job," Wesley told Womack.

Womack organized all of the items n evidence control, then went to the old jail and revamped the space for police equipment, he said. Womack thanked the council, but said she could not have done all the work without the help of Sgt. Keith Scoby.

Scoby was serving as the school resource officer for Denham Springs schools when he worked with her, Womack said.

Scoby has since been promoted to sergeant and moved to another assignment but deserves credit too, she said.

The audit is required by the state Department of Environmental Quality.

DENHAM SPRINGS – A Denham Springs police officer was called to the City Council meeting on Monday under false pretenses, but there was nothing shady going on.
https://www.livingstonparishnews.com/news/council-recognizes-work-by-evidence-control-officer/article_d931a10c-48b5-11e8-ba6d-877bdeb60261.html
Tweet
How do you feel about this post?
Happy (1)
Love (0)
Surprised (0)
Sad (0)
Angry (0)
Tags:
evidence control officer Evidence Officer
Golden State Killer suspect arrested in California
Ormond Beach evidence custodian fired after audit ...
Comment for this post has been locked by admin.