In 2019, the Palm Beach County Sheriff's Office DNA lab was able to get a match from the lip of the beer can. 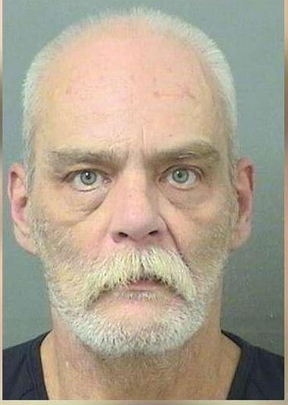 Leo Beauregard was found dead June 29, 1990, in his North Palm Beach apartment. More than 30 years later, village police say they know a man who may have been involved in his murder.

NORTH PALM BEACH — When police went into Leo Beauregard's apartment on June 29, 1990, they found the 68-year-old man slumped back and covered in blood on his pale-green chair in the living room.

Detectives noted a few things around inside:

– A spotless and empty beer can on an otherwise bloodied table.

– A calendar from the year prior with "Mark('s) Birthday" handwritten on June 26.

– A handwritten note with the address for a Michigan prison and an inmate's number accompanying it with the name "Mark" again.

Thirty years later, a man with the same birthday and Department of Corrections number, Mark Steven Gribbin, was arrested by police in connection to the fatal stabbing of Beauregard. Investigators say it was DNA tested from the Busch beer can that connected him to the scene.

Gribbin, 57, is charged with one count of first-degree murder and was held without bond by Circuit Judge Laura Johnson during his first appearance in court Thursday.

It's unclear how the two men knew each other, and Gribbin denied knowing Beauregard whatsoever, according to the police report.

Thirty years ago, a neighbor called police after finding the bloodied Beauregard inside his apartment on Paradise Harbor Boulevard, off U.S. 1 just north of Northlake Boulevard.

Once inside, police "noted the copious amount of blood spatter" on a table and wall near the 68-year-old. Investigators later learned that he had a 7-inch stab wound in his neck, which severed his carotid artery and jugular vein. Investigators noted the wound nearly exited out the other side of his neck.

Police also found the Busch beer can on a table next to Beauregard's body. In their report, they said that while the table was covered in blood, the can was not. Instead, they wrote, there was blood spatter underneath the can.

In 1990, police said several items were missing, including Beauregard's wallet and a bracelet and ring he had made with the gold from his late wife's rings.

Gribbin was not charged with robbery as of Friday.

It's unclear from the arrest report if Gribbin ever was questioned in the early stages of the investigation.

Police noted Gribbin had recently been released from prison and had his parole transferred to West Palm Beach, where he said he lived with his mother. Her home was 5 miles from Beauregard's apartment, according to police.

According to public records, Gribbin has been in and out of prison in Michigan and Ohio for burglary and robbery.

The case went cold in 1995 and was picked back up in 2018 when the North Palm Beach Police Department created a cold-case investigation squad. In 2019, the Palm Beach County Sheriff's Office DNA lab was able to get a match from the lip of the beer can.

In January, detectives went to Ohio to meet with Gribbin. He denied knowing Beauregard or ever being in the apartment, according to the police report.

Beauregard and his wife, Noella, had been residents of Palm Beach County since 1972, when they moved from Massachusetts for semi-retirement, according to friends and family who spoke to The Palm Beach Post after his death in 1990. His wife died in 1980 and he moved from their Singer Island residence to North Palm Beach.

Before his death, the World War II veteran, who served in the U.S. Army in the Philippines, had planned to spend a month with family up north, though he vowed he would never live in the "frigid weather again," his older brother Norman told The Post at the time.