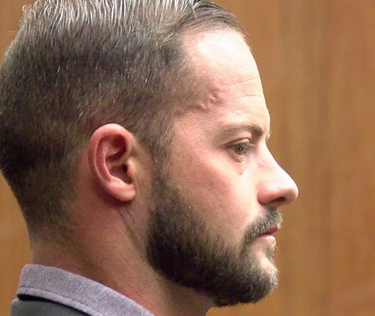 BAKERSFIELD, Calif. (KGET) — Entering a sheriff's property room under the guise of retrieving drugs for destruction, former deputy Logan August stole hundreds of pounds of marijuana and conspired with another deputy to put the drugs on the street.

In federal court three years ago, August was sentenced to probation after pleading no contest to a single charge. Kern prosecutors said the punishment was too lenient, especially after further investigation revealed far more marijuana — more than 300 pounds more — was stolen than originally believed. With their new findings, prosecutors brought state charges against August and another former deputy.

On Thursday, August was sentenced to four years in prison after making an "open plea" of no contest to the 15 felonies filed against him. The plea meant there was no deal with prosecutors in place and he, in effect, was throwing himself at the mercy of the court.

The prison term was met with tears from his many family members and friends in attendance. August's young daughter cried, "I want my daddy," as family left the courtroom and August was led away in handcuffs.

August's attorney, David A. Torres, had asked Judge Judith K. Dulcich to sentence his client to probation. The prosecution asked for five years in prison, and the probation department recommended a 3-year term. August had faced a maximum of nine years in prison for charges that included drug trafficking, burglary and conspiracy.

Before handing down the sentence, Dulcich said she took into account the complexity of the operation and the trust the community had in August as a sheriff's deputy. August also induced others to participate in the scheme, something the judge said weighed heavily in her decision.

In a lengthy statement to the court, August apologized to Dulcich, the deputies in the courtroom and the audience for his actions. He said he was humbled and disgusted by his actions.

"I disgraced everything you guys are wearing with my decisions," he told the deputies.

August's voice broke as he addressed the audience, but he said he was crying tears of joy, not sadness. His life has changed for the better since his arrest, he said, and his faith and volunteer work helped him to become a person of integrity. He had believed he would lose his family over the scandal, but they've stood by him.

"I shouldn't be deserving of having my wife sitting in the front row right now, but God has restored my marriage," August said.

A video submitted on August's behalf featured comments from family and friends describing him as a good man who made a terrible decision. His wife, Tiffany August, said she noticed a change in her husband when he joined the sheriff's narcotics squad and went undercover. He had to change his behavior and appearance to associate with drug dealers, and those changes impacted how he acted in his home life.

Her husband didn't return to normal until he left that assignment, Tiffany August said in the video.

Prosecutor Garrett Rice told the court the case brought by the District Attorney's office against August was not a simple rehash of the federal case. Rather, it addressed the lies August told during the federal investigation when he claimed to have stolen a couple dozen pounds of marijuana rather than the hundreds of pounds of drugs he actually took.

August didn't have a single lapse of judgment, Rice said. The investigation revealed he made multiple trips to steal drugs from the evidence room and tried to hide his thefts with falsified paperwork.

Rice noted there are many men and women working in law enforcement in Kern County who have faced the same choice August had. They chose to uphold their oath and serve the community rather than act out of greed, he said.

The actions of August and other law enforcement officers who break the law have a long-lasting impact, the prosecutor said. He referenced the recent protests expressing anger and mistrust of law enforcement in cities across the country.

"What reasons does the public have to mistrust and hate officers?" Rice said. "This is one of them, unfortunately. This is something that sets the court back, it set the DA's office back, it sets KCSO, BPD, CHP — every time this happens, it sets that trust back years, if not decades."

Two months ago, Penney pleaded no contest to two counts of falsifying a police report and was sentenced to 90 days in jail and two years' probation.

At the time the state charges were filed, then-District Attorney Lisa Green said filing state charges against the former deputies didn't violate the Double Jeopardy Clause as federal and state court are separate jurisdictions. A person can be tried in federal court for an offense then stand trial in state court for the same act, she said.