Hired a felon as an officer and supplied a gun to a code enforcement officer who failed a psychological exam. 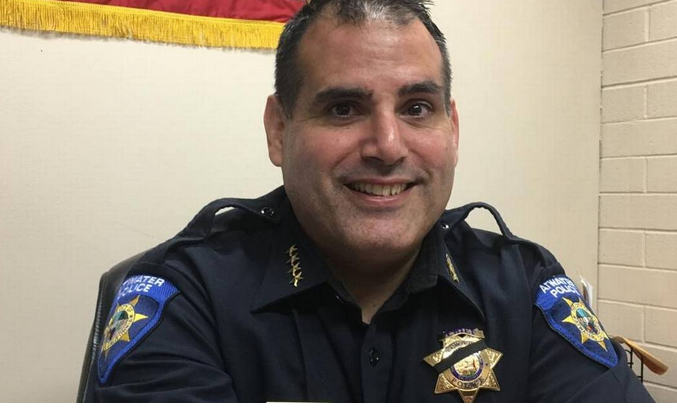 The termination letter for former Atwater Police Chief Samuel Joseph alleges he did not properly secure the department's evidence locker, routinely bullied or threatened subordinates, hired a felon as an officer and supplied a gun to a code enforcement officer who failed a psychological exam.

The letter became public record when it was made part of the lawsuit that Joseph has brought against the city of Atwater, claiming he was wrongfully terminated in November. He is suing for damages and lawyer fees.

In September 2017, Joseph ordered a sergeant to give a 9 mm handgun with a "high capacity magazine" to the code enforcement officer, who was not a sworn officer, despite knowing the officer had failed his exam, according to the letter. The officer had possession of the gun until Interim Chief Armando Echevarria took over in January of last year.

"Despite this employee's questionable psychological background, you still issued him a firearm with a high capacity magazine in violation of the penal code," the letter says of Joseph. "Your conduct constitutes willful misconduct."

Joseph was placed on paid leave in January of last year by then-Interim City Manager Art de Werk. Joseph was terminated by City Manager Lori Waterman in November. He made $161,115 during that time, according to Waterman.

Michael Rains, the attorney for Joseph, called the allegations laughable and unprovable. "Chief Joseph denies all of the allegations and disputes every single one," he said Tuesday. "Each of these allegations will be refuted."

During that same month in 2017, Joseph hired an officer who had previously been convicted of a felony, the termination letter says. Joseph also violated the city's policies by having that convicted officer's background check conducted by an officer who was friends with the applicant.

"Even if this candidate had no history of criminal conduct, asking an applicant's friend to do a background investigation constitutes very poor judgment," the letter says. "This applicant was not only arrested but convicted of a felony."

Rains said Joseph relied on the information he was given by the sergeant who did the background check before hiring the officer, who had scored highest in the interview process.

"It's nonsense that they were friends. That's not true," Rains said. "We're prepared to present plenty of evidence on that, to refute that. It's no problem."

Joseph routinely disparaged officers and threatened to "ruin their lives" by terminating them, the letter says. He also asked officers about union decisions, which is inappropriate, according to the letter.

Even if fired employees won back their jobs through an appeals process, the letter alleges, Joseph said "they would be financially ruined, and their wife and kids would hate them."

The letter also points to Atwater's troubled evidence locker. Problems with the police department's evidence room came to light in August when a letter from District Attorney Larry Morse II surfaced. It informed area defense attorneys that some evidence may be missing. The Sun-Star has confirmed investigators believe the missing evidence may include guns, drugs and cash.

Problems with evidence-storage practices in Atwater had been documented before the most recent revelations, according to an audit conducted in 2010 by the California Commission on Police Officers Standards and Training. The termination letter alleges none of the recommendations from that report had been implemented under Joseph's tenure.

Rains pushed back against those allegations, saying Joseph, who was a sergeant at the time of the audit, was aware of changes in evidence practices made after 2010. No other discrepancies in the evidence locker were reported until Morse's letter in August, after Joseph was put on leave, Rains said.

The letter alleges several other violations, including the draft employment contract that Joseph shared improperly, officials said in September.

Rains said Joseph was concerned about de Werk's credentials and believed the former city manager was after Joseph's job. He said Joseph did not commit any violations in sharing the contract.

The city will have a difficult task in proving any of the allegations, and Rains added that witnesses would be cross examined. "I hope the entire city of Atwater attends Sammy's hearing once we get approved by the superior court, and hears the ridiculous allegations," Rains said.

Officials with the city of Atwater have interviewed candidates for the full-time chief job, including de Werk, according to White. But de Werk was not a finalist, White said, adding a chief has been selected pending a background check.