Pleading guilty in August to stealing from the scene of an active homicide investigation earlier this year. 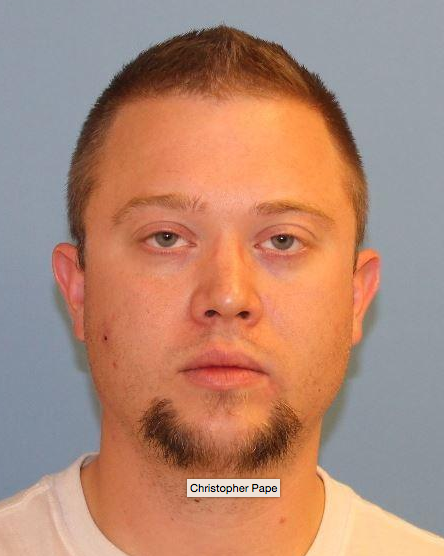 A former Fremont County Sheriff's deputy was sentenced Friday to two years in the Department of Corrections after pleading guilty in August to stealing from the scene of an active homicide investigation earlier this year.

District Judge Ramsey Lama sentenced Christopher Pape, 30, to prison for tampering with physical evidence, a Class 6 felony, which will be followed by one year of parole. The sentence will run concurrently with two 12-month jail sentences for theft and official misconduct, both Class 2 misdemeanors.

As part of the plea agreement, the sentencing range spanned from probation to a total of five years incarceration.

Pape also is required to pay nearly $6,000 in restitution to the family of the victim for two silver dollar coins, a bracelet and two silver ingots that were taken from the crime scene.

Pape was hired with the FCSO in October 2013 and was fired a few days after his arrest in June.

According to the arrest affidavit, Pape was helping FCSO detectives investigate the "suspicious death" of Kenneth Orchard, 76, on May 22 at his home on Pinion Avenue when the detectives requested the assistance of the Colorado Bureau of Investigation to investigate the arson portion of the incident.

A former Fremont County Sheriff's deputy was sentenced Friday to two years in the Department of Corrections after pleading guilty in August to stealing from the scene of an active homicide investigation earlier this year.
http://www.canoncitydailyrecord.com/news/canoncity-local-news/ci_32203206/former-fremont-county-sheriffs-deputy-gets-2-years
Tweet
How do you feel about this post?
Happy (0)
Love (0)
Surprised (0)
Sad (0)
Angry (0)
Tags:
West Coast stealing from crime scene
Fake Bills Found in Lewiston Not Counterfeit, Lega...
Water leak in evidence room at Ingham County Sheri...