"it was found that you mishandled seized prescription drugs and were untruthful when asked about their whereabouts, 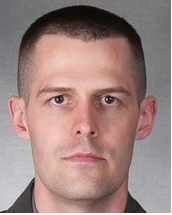 MANSFIELD -- A former Ohio State Highway Patrol trooper at the Mansfield post has been indicted on three felony charges after an internal investigation into missing drugs seized at a car stop.

According to a Dec. 27 termination letter from the Ohio Department of Public Safety, trooper Preston C. Brooks, 32, was fired for violating the OSHP rules and regulations regarding false statements, truthfulness and conduct unbecoming of an officer.

"...It was found that you mishandled seized prescription drugs and were untruthful when asked about their whereabouts," according to the letter, signed by the Ohio Department of Public Safety Director Thomas J. Stickrath.

As a result of the investigation, the termination letter states Brooks was indicted by a grand jury in Richland County Common Pleas Court on two third-degree felony counts of tampering with evidence and one fourth-degree felony count of theft of drugs. He is scheduled to be arraigned Jan. 14 before Judge Brent Robinson.

OSHP Lt. Craig Cvetan said Tuesday he could not comment on the case because it's an ongoing investigation.

The traffic stop took place on Nov. 1 at about 6 p.m. on Possum Run Road in Washington Township, according to the incident report. The missing drugs were reported on Nov. 4.

The report states the drugs were narcotics or illegal drugs, excluding marijuana. According to the incident summary, the vehicle was stopped for a traffic violation and the driver was arrested for OVI and child endangering. A probable cause search of the suspects' purse revealed suspected drugs.

MANSFIELD -- A former Ohio State Highway Patrol trooper at the Mansfield post has been indicted on three felony charges after an internal investigation into missing drugs seized at a
https://www.richlandsource.com/news/former-mansfield-oshp-trooper-indicted-on-criminal-charges/article_6abceaf4-3163-11ea-94aa-1f9f0f4d9af9.html
Tweet
How do you feel about this post?
Happy (0)
Love (0)
Surprised (0)
Sad (0)
Angry (1)
Tags:
trooper indicted mishandled evidence
Margate cop fired after cocaine went missing
SDPD Crime Lab Manager Is Officially Out Following...