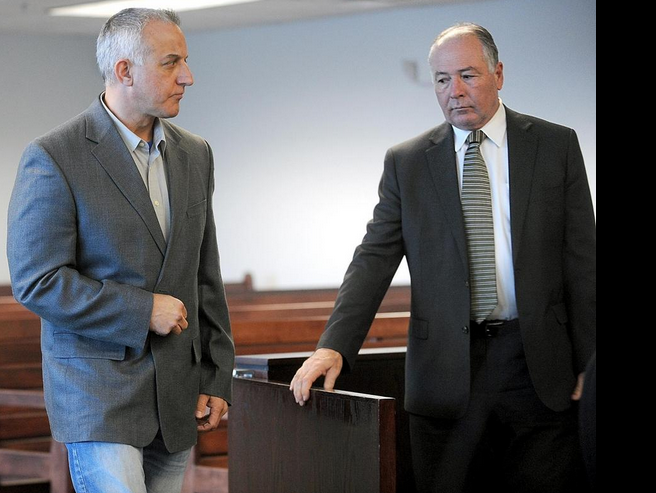 FRAMINGHAM — With his case scheduled to go to trial next month, an ex-Framingham police officer accused of stealing money from the department's evidence room is asking a judge to drop one of the charges against him.

Michael Kelly, Dubeshter's court-appointed lawyer, contends the state failed to present sufficient evidence to a grand jury earlier this year to support his indictment on the charge.

While a number of witnesses were called to testify before the grand jury, Kelly contends that none presented information showing Dubeshter used his position as a police officer to solicit or receive anything of substantial value, or to secure any other "unwarranted privilege" — a term used under state law to refer to special perks that aren't available to the public.

Dubeshter, a 30-year veteran of the Framingham Police Department, was previously in charge of receiving, cataloging and maintaining evidence in criminal cases.

He came under investigation in September 2015 after police allegedly discovered envelopes from the evidence room inside Dubeshter's truck, according to court records.

Prosecutors say the envelopes — typically used to store cash seized in criminal cases — had been tampered with, and that currency was missing.

Soon after, investigators allegedly discovered that envelopes in the evidence room had been tampered with in the same way, allowing the contents to be stolen. An audit later determined that approximately $70,000 was missing.

Dubeshter was placed on leave Sept. 21, 2015 and resigned seven months later. A grand jury seated in Suffolk County then returned two indictments against him in January 2017.

Dubeshter pleaded not guilty in March to charges of larceny over $250 and using his position to secure an unwarranted privilege for himself.

Dubeshter's lawyer is scheduled to appear before a superior court judge on Sept. 5 to argue the grand jury indicted his client on insufficient evidence on the second count.

In Massachusetts, it is illegal for any officer or employee of a state, county or municipal agency to use his or her position to solicit or receive an unwarranted privilege.

After reading the minutes of the grand jury proceeding, Kelly wrote that he believes prosecutors failed to present evidence that Dubeshter's alleged conduct met the textbook definition of solicitation.

News of the evidence room thefts surfaced publicly in December 2015 after an internal email from the police chief was leaked to a local television station. In the Nov. 30, 2015 message — obtained by the Daily News through a public records request — Chief Kenneth Ferguson wrote that "some officers" had been subpoenaed to testify before a grand jury, which was due to convene that week.

However, more than a year passed before the grand jury indictments were returned. In the interim, town officials say they tightened procedures in the evidence room, and ended the practice of maintaining possession of seized cash. The money is instead deposited in a bank account and tracked through the town's accounting system.

A comprehensive audit determined the cash that went missing from the police department had been seized by police, and wasn't being held as criminal evidence, the town manager said earlier this year.

Speaking at Town Meeting in the spring, Police Chief Kenneth Ferguson said the town hopes to be reimbursed by its insurer, Travelers Insurance, through a policy that covers employee theft.