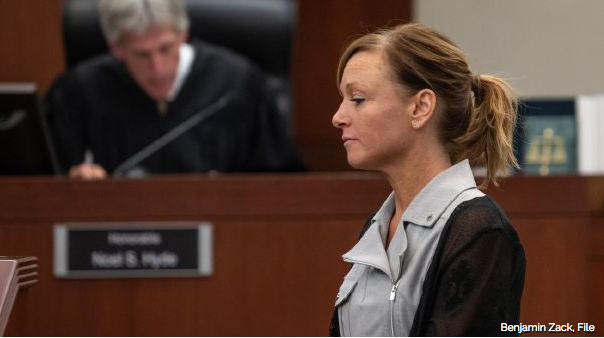 OGDEN — A Weber County sheriff's employee who compromised 20 criminal cases when she stole and used meth that was being held as evidence carried out a "devastating" violation of public trust, a judge said Tuesday.

As 2nd District Judge Noel Hyde ordered her to a year in jail, the 48-year-old Candice Barbara Follum quietly put her arms behind her back and a bailiff moved to arrest her.

The full impact of the missing drugs did not come to light in the Ogden courtroom Tuesday. The state believed at one time that Follum destroyed at least some evidence in as many as 60 cases, but now estimates just 20 were affected.

Hyde said he found it "perhaps the most troubling" that the onetime evidence technician breached the public's trust in the law enforcement agency she no longer works for.

"This kind of conduct and its impact on our society is devastating," he said.

The cost of combing through thousands of items in the evidence room also isn't known, but it has taken at least hundreds and potentially thousands of hours, he said. The room — filled with cash, drugs and other items police suspect played a role in Weber County crimes — remains out of order as employees continue to survey what is missing. New materials gathered from more recent offenses are being housed elsewhere

An internal Weber County Sheriff's Office investigation began after Follum's colleagues reported they believed she was on drugs at work a year ago. She was suspended and later fired after admitting in a written statement to her employer that she had been taking and using meth from the room she oversaw.

The internal probe followed complaints from coworkers, a plunge in her performance that included her failure to send out sexual assault kits for forensic analysis and other problems, according to a report released in May.

Follum told investigators with the county attorney's office that she had become addicted while working there and stole drugs from evidence over three years, eating it every other day and only using the drug while at work, court documents say.

On Tuesday, Hyde said Follum's penalty reflects the severity of her behavior but acknowledges the role substance abuse played.

Follum's sentence also includes three years of probation and a $487 restitution payment for items found missing, with the possibility of work release during her last six months in jail.

The penalty lines up with recommendations for jail time in an agreement she previously reached with prosecutors. In October, she pleaded guilty to 20 counts of altering public records, a third-degree felony, and 20 counts of drug possession, a class A misdemeanor.

Since she was charged in August, Follum has completed a treatment program and has been shown to be clean in "numerous" drug tests, noted defense attorney Kristopher Greenwood.

Follum, appearing in court in a black sweater, did not speak during the hearing. Her family members defended her in letters to the judge.

In one note, her mother said Follum is a devoted mom and a new grandmother who became addicted as she suffered overwhelming stress in her personal life and at work. Sherry Harris emphasized her daughter has completed rehabilitation and participates in an ongoing program.

Her daughters, Zoe and Brittnee Follum, also sent letters of support. Their mother has been clean for a year, attending group and other meetings daily, Brittnee Follum wrote. She was staying in her mom's home at the time her mother was using meth but failed to spot the signs, believing her mother was fighting depression and working out a lot, she wrote.

"What my mom did was wrong and she knows that. She is doing her best to embrace a new life," she wrote. Candice Follum, she noted, will miss the birth of her second grandchild while in custody.

The judge acknowledged Follum's path from addiction to recovery will be difficult. He commended her for the progress she has made.

"Ultimately you have a battle which must continue to be fought," he said. "You cannot give up that fight."