Vialpando said there was a lack of consistency in keeping track of the chain of custody of certain evidence and that some pieces of evidence were labeled with the wrong case numbers. 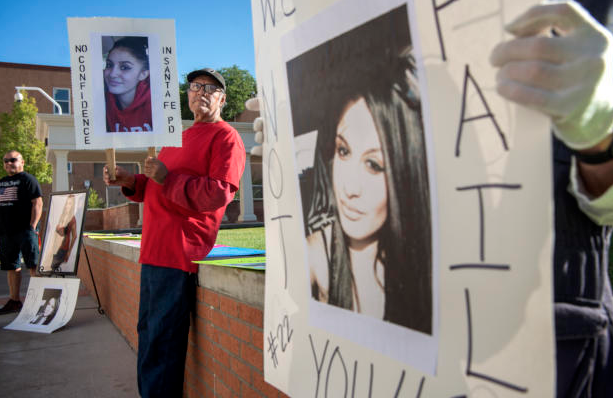 The ruling came after a crime scene technician who did an independent audit of evidence in the case testified that the SFPD didn't adhere to its own policies regarding the safekeeping of the evidence.

Garcia also allegedly beat a man after breaking into his apartment and stabbing another man outside the apartment complex.

In late June, Paul Joye, who was recently promoted to Deputy Chief of operations at the SFPD, sent a letter to Santa Fe Deputy District Attorney Todd Bullion saying the department lost 11 pieces of evidence, including trace hair that was found on Valencia's body as well as some of her fingernail clippings.

As a result, Garcia's attorney, Jennifer Burrill, filed a motion to have the case dismissed. She argued that the fingernail clippings could have shown that she was struggling with someone other than Garcia before her death.

Judge Mary Marlowe Sommer denied the dismissal motion Friday, but not before hearing from Santa Fe County Sheriff's Office crime scene technician Shari Vialpando, who conducted the court-ordered audit of all of SFPD's evidence in the case.

Vialpando said there was a lack of consistency in keeping track of the chain of custody of certain evidence and that some pieces of evidence were labeled with the wrong case numbers.

"I do not believe they (SFPD) adhered to the policies they set forth," Vialpando said on the witness stand.

Vialpando also said some envelopes containing evidence were unsealed, but she couldn't say for sure if the contents were contaminated.

Although Marlowe Sommer didn't grant the motion to dismiss, she did say the missing evidence can be addressed in instructions to the jury at trial. The trial is scheduled to begin Oct. 21.

SANTA FE — A Santa Fe District Court judge on Friday denied a defense motion to dismiss a murder case, despite the Santa Fe Police Department losing evidence. The ruling…
https://www.abqjournal.com/1371872/judge-lets-murder-charge-stand-despite-sfpd-losing-evidence.html
Tweet
How do you feel about this post?
Happy (0)
Love (0)
Surprised (0)
Sad (0)
Angry (0)
New federal rules will limit police searches of DN...
Genealogy, DNA helped identify Utahn suspected in ...
Comment for this post has been locked by admin.