Judge Wade Naramore and his wife, Ashley, enter the Garland County
Courthouse for the judge's pretrial hearing Tuesday in the death of
their son. 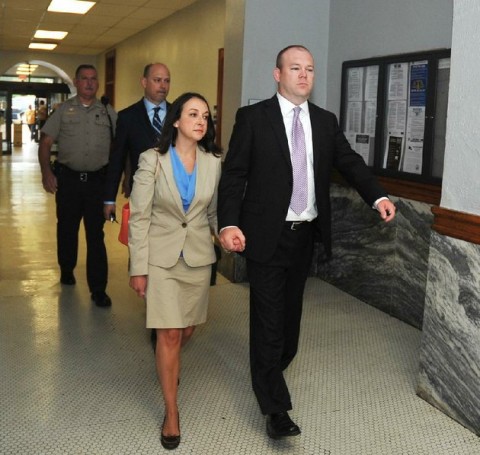 HOT SPRINGS -- Prosecutors must produce within a week a clear status on missing evidence in the case against a Garland County judge whose son died after being left in a hot car, or further action will be necessary, special Circuit Judge John Langston said Tuesday. The trial of Garland County Circuit Judge Wade Naramore, 36, was rescheduled to Aug. 15-19, with a pretrial hearing July 29. Langston, without elaborating on his reasoning, also denied a defense motion to dismiss the case. In a departure from previous court appearances, Ashley Naramore abdicated her usual seat in the front row of the courtroom gallery to sit at the defense table, clutching her husband's hand with both of hers throughout Tuesday's nearly hourlong hearing.

Their 17-month-old son Thomas died July 24 -- the couple's five-year wedding anniversary -- after Wade Naramore forgot to drop the child off at day care, leaving him in the car in excessive heat for more than six hours. Naramore pleaded innocent to negligent homicide in March after his February arrest. The Class A misdemeanor is punishable by up to one year in jail and a $2,500 fine. Defense attorney Erin Cassinelli said in an interview after the hearing Tuesday that the couple is still struggling with the loss. "They are heartbroken," Cassinelli said. "And, if it's even possible to make that pain worse, being drug through a lengthy, highly publicized criminal process has made it even more unbearable." The trial was originally set to begin Tuesday, but the prosecution said in a May 31 motion that more preparation time was needed because the majority of the prosecution team was assigned only recently.

At issue as well was that evidence pertinent to the case is missing. It was discovered in May that a thumb drive containing Naramore's phone records, and a video, purportedly showing Naramore entering and exiting the courthouse the day his son died, were unable to be accessed. The Hot Springs Police Department computer servers were sent to the state Crime Laboratory on June 2 in an attempt to retrieve the missing video. Deputy prosecutor Thomas Young said that he is working with two sources to replicate the phone records that were contained on the thumb drive. Langston gave the prosecution a week to give a status on the missing evidence and said from the bench that "the court will have to make some orders" if the evidence issue is not resolved. He did not elaborate on what those orders might be. Cassinelli offered to give the prosecution Naramore's phone records and said she was not "willing to postpone this trial for phone records." Cassinelli had said at a June 3 hearing that she did not believe the phone records were "overly relevant" to the case.

The video, however, has "substantial exculpatory value," Cassinelli said and then asked Langston to make production of the evidence a "sense of urgency." "I suspect we will be making a motion if something doesn't happen soon," Cassinelli said at the hearing. She added that the defense has been requesting the evidence for "months and months" and was not told of missing evidence until after the defense filed a "bill of particulars" on May 12 requesting all the case evidence be turned over. When asked after the hearing, Cassinelli said she could not say at this point what type of action she will take, or when, if the evidence is not produced. "Losing or destroying exculpatory evidence has potential evidentiary and constitutional implications," she said. Young said in an interview after the hearing that the prosecution has "nothing to hide" and it's the ultimate hope that the evidence will be accessed soon. Cassinelli also argued the prosecution did not prove in its own bill of particulars filed Monday -- which had been ordered by Langston at a June 3 hearing -- that it had sufficient grounds to charge Wade Naramore with negligent homicide. The prosecution must prove there was "blameworthy" conduct from Naramore that led to the death of his son, Cassinelli said. Naramore's actions on the day of his son's death constituted a "gross deviation from the standard of care that a reasonable parent" in charge of a child that age would have in the same situation, the prosecution wrote.

The defendant would have had to have done "something more" than forget his child to constitute criminal negligent homicide, Cassinelli said. Young told Langston that he took "umbrage" with the defense attorney's stance that the bill of particulars was not sufficient, and that the question of whether the activities constitute a clear crime is up to the jury. "If they want me to state our complete theory of the case, that's inappropriate," Young said. Cassinelli also told Langston that she takes issue with "false statements" Young made to the media saying that the nearly seven-month gap between the July death of Thomas Naramore and the February arrest was because of Wade Naramore's lack of cooperation with authorities. Statements like that could negatively influence potential jurors, she said. At a June 3 hearing, defense counsel Patrick Benca said the Naramores and his defense team went overboard to cooperate with authorities from the beginning. Benca said he was in constant contact with special prosecutor Scott Ellington outlining Wade Naramore's willingness to sit down with investigators and to "cooperate in any way, shape or form."

"We were on him every single day telling him, 'Mr. Naramore wants to talk with you. Let us know. Let us know,'" Benca told the court. According to court documents, within days of Thomas' death, Wade and Ashley Naramore and friends and family members voluntarily went to the Police Department to be interviewed by detectives. "A prosecutor putting false information in the public domain, particularly about a defendant's statement to police, its content, or a factual issue in the case, is reckless and improper," Cassinelli said. "It threatens to prejudice potential jurors who may believe those false statements despite the indisputable documentary proof of their falsity. To speak about any suspect's statement or lack thereof during an investigation threatens that person's constitutional rights, which is why there are strict rules prohibiting such comments by a prosecutor." Young agreed with Cassinelli at the June 3 hearing that he didn't have all the available information when he made that statement to the media. Young and deputy prosecutor Gina Knight were only recently assigned to the case. In a May 31 prosecution motion to reschedule the case, Young said former lead prosecutor Charles Finkenbinder was taken off the case in May because he was reassigned to cover a vacancy in the Jonesboro office. Cassinelli said at the June 3 hearing that that assertion in the motion was false and that Finkenbinder was removed from the case "out of his own will" because he didn't want to prosecute Wade Naramore. A message left for Finkenbinder was not returned as of late Tuesday. Young said he could not comment on Finkenbinder's reassignment because he has "not had a personal conversation with him." "The Naramores want and need to move to a resolution so they can grieve the loss of their child and raise awareness about this type of tragedy, which as we've seen in the news is becoming all too common and, as research confirms, cannot be dismissed as 'bad parenting,'" Cassinelli said. Metro on 06/15/2016 Print Headline: Naramore faces August trial

Tweet
How do you feel about this post?
Happy (0)
Love (0)
Surprised (0)
Sad (0)
Angry (0)
DEA to cops: Fentanyl can kill you too
Fired York County sheriff's deputy now facing thef...
Comment for this post has been locked by admin.