Analysts in Kentucky are now ranked as the lowest paid in the entire United States, and KSP Forensic Laboratory System Director Laura Sudkamp told Pure Politics she is the lowest paid director in the nation, "by a long shot." 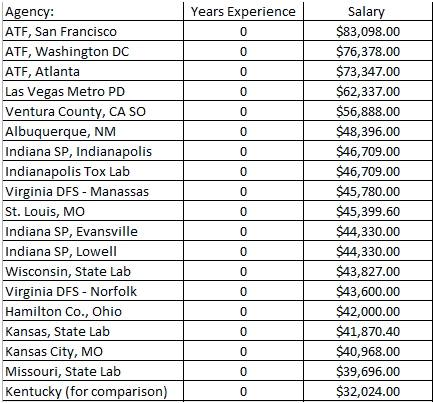 Editor's note: This is part two in a two-part series on Kentucky's attempts to clear the backlog of untested sexual assault cases. Part one can be viewed here.

As Kentucky State Police Lab analysts recheck thousands of previously untested sexual assault kits there exists a frightening possibility that despite best efforts a new backlog will be created because of incredibly low pay, and high turnover rates.

While earning more than others in state government, analysts, who undergo between six months and two years of highly expensive job training provided by the state, are often leaving for $15,000 – $20,000 more per year in surrounding state crime labs.

Analysts in Kentucky are now ranked as the lowest paid in the entire United States, and KSP Forensic Laboratory System Director Laura Sudkamp told Pure Politics she is the lowest paid director in the nation, "by a long shot."

In the past five-years there has been a 40 percent turnover rate in the KSP lab of analytical staff, Sudkamp said.

Sudkamp has been tracking Kentucky's crime lab pay scale against the pay at other crime labs across the United States. Her latest data, reflected in the chart below, illustrates the disparity in pay between Kentucky, and the rest of the nation.

Actual job postings collected by Sudkamp in January for state's seeking analysts for those with one, two, three years of experience show Kentucky again at the bottom of the pay scale in each instance — often trailing other states by $15,000 to even $40,000 per year in pay.

"We recently lost an analyst to Virginia, he was making $46,000 here and he's making $70,000 there," she said. "We had an analyst that was at the northern lab in the drug chemistry section, and he didn't even have to move he just drives across the river to the Hamilton County Coroner's Office now and he makes, somewhere between $11 – $15,000 more."

Calling the 40 percent turnover rate in analytical staff "tough," Sudkamp said it's the state footing the bill for the time and the training of staff.

"You get them up and get them trained. The quickest ones to be trained are if you're doing blood alcohol or doing blood chemistry and still that's a six or eight month process," she said. "The longest ones are your firearms examiners, and they take almost two years."

Analysts can be trained in numerous sub-disciplines from hair, arson and even paint comparisons for hit and runs. Analysts trained in everything, would take "at least five-years," and the analyst would not be completing case work during that time, Sudkamp said.

There's an outside vendor that has been brought in to train 20 analysts. Currently that training takes a year to 1.5 years to complete. Sudkamp estimates biologists and other analysts from the group will be "on the bench," doing case work by October of this year, assuming they stay in Kentucky.

There are currently 13 DNA analysts doing case work including homicides and rapes, including rechecking backlogged sexual assault cases returning to the state from a lab in Utah. The number of DNA analysts in place after this round of training will be around 30, Sudkamp said.

KSP watches for those analysts seeking training to turn around and leave the state for higher pay. Sudkamp said there are "a couple that we're concerned about."

The lab is seeking a recommendation from legal counsel to see if there is any way the state can institute a contract which would keep lab analysts in state for at least two-years after receiving the training.

"We've known since the 2015 audit report on untested sexual assault kits that the state needs to raise lab analyst salaries to retain these highly-trained and vital personnel," Recktenwald said. "It's penny wise and pound foolish for Kentucky to spend time and money training these individuals — training takes six to eight months — only to lose them immediately to surrounding state labs. This is a clear public safety issue and I sincerely hope the administration remedies this quickly."

When evidence makes its way to the crime lab there are two steps items go through. First an analyst trained in serology looks at items and identifies the presence of bodily fluids, and then determines what goes on to a DNA analyst. Sudkamp said it's a much faster process if two analysts work together — one trained in serology and another in DNA extraction — to work a case to completion.

"All of the people who do the serology screening, with the exception of one, are going into this DNA training," Sudkamp said.

Sudkamp plans on using regional state police labs for assistance, and even counting on DNA analysts who have trained in serology to help assist in that process.

Even though the KSP lab is continuing to recheck the backlogged sexual assault kits, there are still homicide, rape and burglary cases awaiting testing as well. That time consuming process becomes more complicated as judges will occasionally order the lab to take evidence out of the order it was received and run an analysis for trial.

"We probably get about 20 (rush cases) a month, which is really tough, because it backs everyone up," she said. "When you need to wash your dishes it's a lot more efficient if you fill it up and run it rather than run it one dish at a time."

The KSP is about to send a letter to law enforcement agencies informing them of the back up at the lab, and asking that they turn in evidence when it's collected and not weeks before they wish to take a case to trial.

Sudkamp said the letter will inform the 400 law enforcement agencies, and prosecutors in the state that if evidence is held the lab will be outsourcing the testing.

Held together with tape

Another area of the lab that Sudkamp has fears over is the toxicology unit. They're operating with some equipment that's half-a-century old, the lab director told Pure Politics.

"They've got a couple items that we've had to duct tape, literally, to hold a cable in place," she said. "Those are the ones that as equipment fails and we don't have the money to replace it that we're going to have to drop services."

"We may not be able to do paint comparison on hit and run cases."

There is a "horrible backlog" on existing toxicology cases, Sudkamp said. While courts have been patient, she said it's taking analysts six to eight months to complete a case because the lab has to "piecemeal the money to buy the equipment we need."

As a whole the Kentucky State Police has funding woes, Sudkamp said the concerns are noted and being worked on, but there are still new state troopers being put into patrol cars with hundreds of thousands of miles on the odometer.

The Kentucky State Police Forensic Lab is the only lab of it's kind in the state, both public and private.