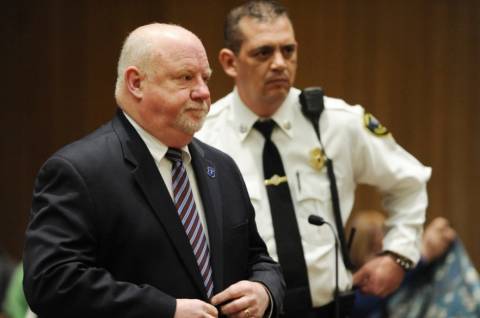 Burnham is facing charges with stealing nearly $385,000 in cash from the police department's evidence room between 2009 and 2014.

Monday's trial date for retired Springfield police detective Kevin Burnham was continued to May 31 because of a medical issue involving the defendant. Burnham was accused of stealing nearly $400,000 from the department's evidence room over four and a half years. Charles Dolan, Burnham's lawyer, asked to go to sidebar to tell Hampden Superior Court Judge Richard J. Carey the reasons for his request to postpone the trial date from March 20.

Carey said he would allow the motion to continue "in light of the medical condition of the defendant."

An April 10 date was set for a status conference on the case.

Carey also allowed Dolan's request to impound the affadavit he submitted as well as the sidebar conference discussion.

Wilbraham police were called to Burnham's home address on Sunday, Capt. Robert Zollo said. "It was a medical (call). It had nothing to do with us," Zollo said Monday afternoon.

Burnham, a 43-year veteran of the police force, pleaded not guilty to multiple counts of larceny at his arraignment in January 2016. Charges were brought by the state attorney general's office after a lengthy investigation of the then 66-year-old retired officer.

The discovery of missing money prompted widespread reforms of accounting for cash seized during drug investigations within the police department.

Burnham was released on his own recognizance at his arraignment with conditions that he surrender his passport, not leave the state without permission from the probation department, turn his firearms over to defense lawyer Charles Dolan and turn his firearms license and FID card over to Police Commissioner John Barbieri.

The case is being prosecuted by the office of Massachusetts Attorney General's Maura Healey.

Burnham was charged with six counts of larceny over $250 and one count of larceny under $250.

The case alleges Burnham stole the cash from envelopes stored in the evidence room. The money had been seized in the course of investigations involving 162 defendants, according to a spreadsheet released by the attorney general's office in connection with the case. The alleged thefts, beginning Dec. 4, 2009, ranged from as little as $11 to tens of thousands of dollars. Burnham retired in the summer of 2014.

According to Healey's office, in some instances, Burnham allegedly "shorted" the cash count by taking money when he recounted it. Burnham also allegedly replaced money he stole from various evidence envelopes with previously seized counterfeit money or with newer money that was put into circulation after the original seizure date.