Now, in an attempt to clear out the shameful number of untested kits, the City of Miami is asking the U.S. Department of Justice for $264,263 to help MPD better organize itself and actually handle sex-crime cases 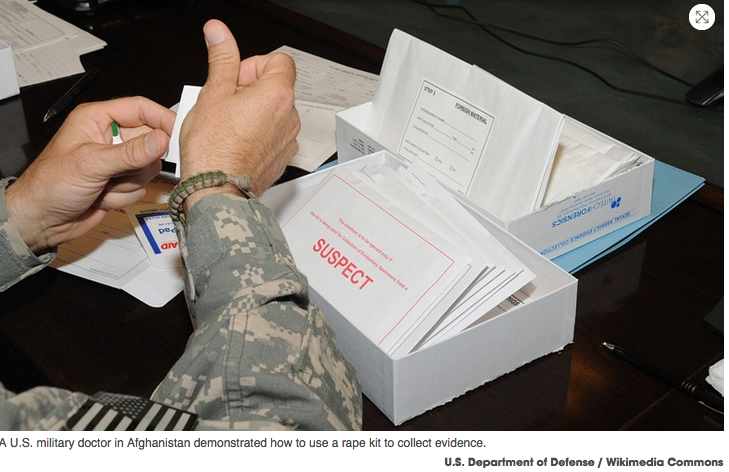 As of 2015, the Miami Police Department reported in a statewide audit that a whopping 2,243 rape and sexual-assault kits were sitting untested on city shelves collecting dust — the highest number of untested rape kits for a single agency in Florida. That meant 2,243 victims had reported a rape or sexual assault, sat through an excruciating DNA-collection process, which often includes swabbing their genitals, and then MPD didn't even bother to run DNA tests on the samples to determine if the data matched anyone on file.

Now, in an attempt to clear out the shameful number of untested kits, the City of Miami is asking the U.S. Department of Justice for $264,263 to help MPD better organize itself and actually handle sex-crime cases. According to a Florida Department of Law Enforcement audit, more than 13,400 rape kits were sitting untested statewide at the end of 2015. Miami-Dade County departments made up 25 percent of that total — and MPD alone accounted for 17 percent of the statewide backlog. (The grant application is up for formal approval at a city commission meeting next week.)

When the audit results were announced, MPD officials claimed the backlog was partially due to the fact that the department simply did not choose to test kits when the offender's identity was already known. But for a police department where guns have been stolen from evidence lockers and murder evidence was knowingly placed under an I-95 highway overpass to rot, that explanation did not seem to add up, especially because comparably large Florida cities such as Tampa and Jacksonville didn't report the same gigantic backlog. Plus, kits can be used to either exonerate innocent suspects or solve cold cases.

Now, the newly disclosed grant application lays out what MPD says is a laundry list of issues with the department's evidence unit — namely, that sexual-assault kits are managed using a 12-year-old, "antiquated" computer program that can barely handle the department's basic data-collection needs. Somehow, the program, called WinAce, hasn't been updated in years despite the fact that the city and federal government generally throw cash at MPD whenever it asks.

In fact, the WinAce system apparently can't even differentiate between gunshot residue kits and rape kits, which means the department doesn't even know which rape kits have been tested or how many are in the department's possession.

"Because we lack an automated system that can accurately categorize and identify evidence, MPD is unable to update the status of unsubmitted rape kits or detect backlogged SAKs [sexual-assault kits] without conducting a physical inventory," the grant application reads. Once funds from the DOJ grant are allocated, MPD officials say their first step is to simply pay workers overtime to count the number of sexual-assault kits they even need to test.

Depressingly, the grant application also says that rape-kit information is still transferred via hard copy and that, in many cases, paper data gets lost or forgotten. According to state law, police departments need to test rape kits within 30 days of receiving them, and MPD says it can only do so using paper forms that can't be tracked online.

"The lab analysis request is made on a hard copy which cannot be uploaded in the WinAce system," the grant application reads. "The entire process from delivery to the County Lab to the return of evidence to MPD once the SAK has been analyzed, is a series of physical stamps and hard copy tracking forms between Unit staff and County Lab personnel. At any time in the process, a SAK may pass through various hands with only hard copy to track the chain of evidence. If a SAK is lost there is no way for either party to determine specifically where the mistake was made or where the SAK is located."

All of this raises an obvious question: If a single bad computer program has been preventing MPD from investigating sexual assaults, why did it take until now to try to upgrade the database? In past years, MPD has received a smorgasbord of seemingly needless "anti-terror" grants and equipment upgrades, including outfitting basically every patrol cruiser on the force with an AR-15-style rifle. If the department's leaders were serious about solving crimes, couldn't at least some of that money have gone to fix basic investigative software? (There are also dangers that come with simply pumping money into police departments without working toward other avenues of cultural and economic change —

According to the application, the new software program will allow the kits to be sorted in a searchable computer database, which will also log each step taken to ensure the kit has been fully tested.

In the grant application, MPD officials acknowledged the huge kit backlog is hurting assault survivors but didn't quite offer a full mea culpa. For what it's worth, the department's murder-case clearance rate is also depressingly low, suggesting that War on Drugs-style policing, which incentivizes cops to ride around poor neighborhoods looking for nickel bags of cocaine, has warped departmental policies away from solving basic crimes.

"The trauma of a sexual assault is pervasive and shattering," the department wrote. "MPD is dedicated to improving the processes that will increase our ability to bring perpetrators to justice and give victims the peace of mind that they have the full support of law enforcement."