No room at the precinct: Police face shortage of evidence space

The amount of evidence collected for criminal cases has been building up for decades, posing a logistical challenge for the department. 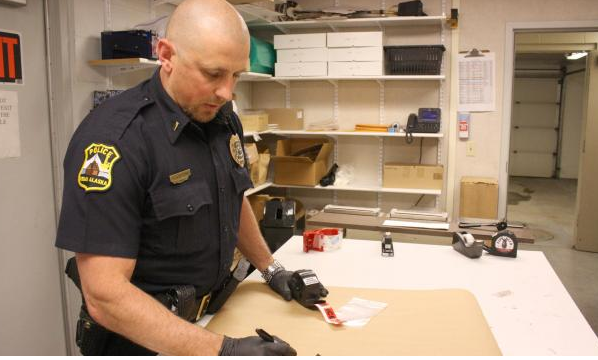 The amount of evidence collected for criminal cases has been building up for decades, posing a logistical challenge for the department.

"Evidence storage in a police department grows and grows and grows," Kenai Police Chief Dave Ross said. "There some stuff you can never get rid of. There are a number of things you have to keep for 50-plus years."

Ross, who was speaking at a Kenai City Council Budget Work Session held last month, discussed the aging precinct building's space limitations and said he anticipated the issue would need to be addressed in the future.

Much of that evidence is held in the precinct's evidence vault — a windowless room stacked from ceiling to floor with envelopes, paper bags and plastic baggies.

"We have evidence lying on the floor," Langham said. "And there's really not much more space that we have to continue to expand some of the items."

"When you have to hold items for that long, at some point it's going to continue to build up," Langham said.

The precinct has catalogued approximately 50,000 pieces of digital and physical evidence since they implemented their current records management system in 1999 — although some of that evidence dates back to decades before that.

All items collected as evidence in criminal cases is first processed by police officers — who bag and label it with the case number, date and officer's initials. The evidence bags are placed in a different secured locker until the evidence custodian removes it for filing.

Kelly Holt, the precinct's evidence custodian, has been organizing and tracking evidence at the precinct for 12 years, and has made the best of the precinct's limited space. She reorganized the vault last year — pulling out drawers and cabinets to make sure all evidence is readily accessible.

While there's a constant flow of new evidence into the precinct — 35 to 50 items per week on average — officers work to clear out as much evidence as they can as cases are resolved.

Evidence used in cases that have gone through the adjudication process are returned to an owner, put up for auction or destroyed. What isn't claimed and has no auction value is destroyed or thrown away, Holt said.

"We're working hard to turn evidence over so we can get it back out so we can it back out to create space for new evidence," Langham said.

No room at the precinct: Police face shortage of evidence space | Peninsula Clarion