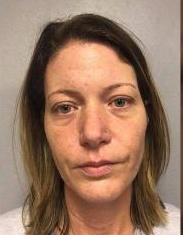 TRINITY, TX (KTRE) - A Trinity police dispatcher has been arrested following an investigation in connection with the theft of methamphetamine placed into evidence.

Johnna Brown Thompson, 42, of Lufkin, is charged with third-degree tampering with evidence.

Chief Steven Jones said a Texas Ranger just picked her up in Lufkin and is bringing her to the Trinity Police Department so she can be officially processed.

Jones said Thompson stole less than a gram of meth by manipulating a dropbox.

"I'm proud to say that in my 10 years at Trinity PD, this is the first arrest in the department we've made," Jones said. "I just want to be upfront about it because we shouldn't hide something like this just because it's one of our own. We report on criminals so we'll report on our own."

Jones said the meth was brought into evidence on April 25 following an arrest. Police noticed it missing Thursday after they tried to retrieve it to mail it to DPS for testing.

"At first I went after (Officer David) Givens, because he was the one who put it into evidence," Jones said. "I told him he did it wrong and lost our evidence but he said he did it right. So we pulled the surveillance video and saw her steal it."

The surveillance showed Thompson stole it on April 30, Jones said.

Thompson had been with the department about four months, Jones said.

Top Stories : Police chief: Trinity dispatcher arrested for stealing meth out of evidence
http://m.ktre.com/ktre/db_330602/contentdetail.htm?full=true&contentguid=bdVR5CUR&pn=&ps=#display
Tweet
How do you feel about this post?
Happy (0)
Love (0)
Surprised (0)
Sad (0)
Angry (0)
Sheriff's department packs up the pills, to be des...
City of Kawartha Lakes Police officer facing more ...
Comment for this post has been locked by admin.