Police, strike force aim to dispose of 300 guns in Utah

The guns are likely to be sold to a federally licensed firearms dealer. 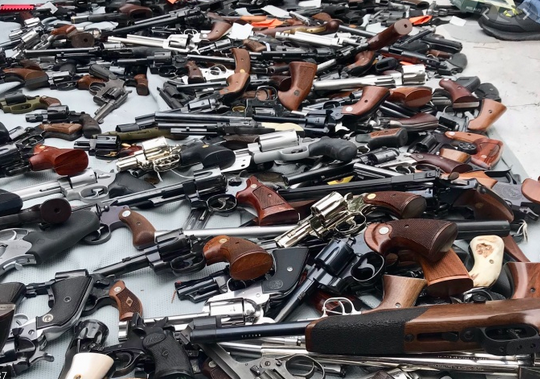 OGDEN, Utah (AP) — Two law enforcement agencies in Utah are looking to dispose of more than 300 guns accumulating in evidence storage that either went unclaimed or are no longer needed in criminal investigations.

The Ogden Police Department and Weber Morgan Narcotics Strike Force have asked the Ogden City Council to approve requests to send the firearms to the state Bureau of Forensics, which would destroy them, the Standard-Examiner reported.

Police Capt. Jake Sube said the police department previously disposed of firearms through an incinerator facility in Davis County, but it no longer exists. Landfill or incinerator fees are also costly.

The proposal would help the department save money and "will keep our evidence room from being overpacked," Sube said.

The department's Evidence Unit has strict standards for logging firearms in its custody and documenting the circumstances leading to its acquiring them, including the steps taken to return a firearm to its lawful owner.

The proposal would also allow the department to keep some of the guns for training. Ogden Deputy Attorney Mara Brown said additional council approval would be needed if the department has plans to sell any of the firearms.

The strike force plans to sell most of the guns in its possession with financial oversight from the city, Deputy Weber County Attorney Matt Wilson said. The guns are likely to be sold to a federally licensed firearms dealer. Under state law, law enforcement agencies are able to conduct such transactions, but all proceeds must go to public use.

Strike Force commander and Ogden Lt. Chris Kavolsky said funds from gun sales would be put toward maintenance issues at the agency's headquarters, including new carpet, a new bay door and a kitchen.

Police, strike force aim to dispose of 300 guns in Utah