In the settlement reached with the pro bono law firm Public Counsel, the city agreed to build 388 lockers for the property of homeless people and to stop enforcing three laws that prohibit tents, personal property and
overnight sleeping on public property. 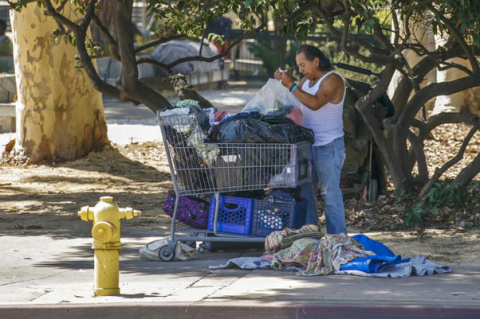 Homeless residents of Pomona will be provided storage for their property and will be allowed to sleep in public spaces until shelter beds exist for all of them, following the settlement of a lawsuit challenging the city's practice of homeless cleanups.

In the settlement reached with the pro bono law firm Public Counsel, the city agreed to build 388 lockers for the property of homeless people and to stop enforcing three laws that prohibit tents, personal property and overnight sleeping on public property.

Enforcement of the overnight sleeping ban could resume once sufficient accommodations exist, either in indoor shelters or open spaces designated for overnight stays.

Both sides praised the agreement as a win for the city and its homeless population and as a model for cities struggling to balance their health and safety measures with the moral and legal restraints on homeless crackdowns.

Across California, laws that criminalize homeless people continue to be enacted and enforced, despite constitutional challenges that are gaining weight in the courts, according to a June study by the Berkeley Law Policy Advocacy Clinic at UC Berkeley. The authors found that all of California's 58 largest cities have laws that target homeless people by restricting standing, sitting and sleeping in public places.

"So many lack sufficient shelter options and yet have these 'anti-homeless' ordinances that penalize the homeless for doing what they simply have to do to survive," said Christina Giorgio, Public Counsel's attorney in the case.

The city of Santa Ana on Tuesday declared a health and safety crisis and voted to increase policing and enforcement of a growing homeless encampment in Civic Center.

By contrast, the Pomona City Council is scheduled next week to approve construction of the lockers for its homeless population and to declare a "shelter crisis," allowing public facilities to be used as shelters.

The Pomona agreement "stops the practice of ticketing folks for camping and sleeping in public when those being ticketed don't have a choice but to sleep where they are because there are not housing options for them," Giorgio said.

From the city's viewpoint, the settlement preserves its power to remove permanent dwellers from public places if they have another place to sleep.

"The ultimate goal is to get people off the streets," said Assistant City Atty. Andrew L. Jared. "You can't shackle someone and force them to go somewhere. At the same time the police powers of zoning do not allow people to sleep and live in public areas."

Though the agreement does not require the city to provide more shelters, Jared said the lawsuit only spurred efforts already underway.

Within a month the city will roll out a proposal for an open-air accommodation, Jared said.

"People would be able to roll up their beds in that location," he said. "It would be managed. It wouldn't be a tent city. There would not be the lawlessness that occurs in other places where the city turns people out on a vacant lot."

More conventional solutions are also in the works.

The City Council has approved a shelter zone where a Christian organization hopes to open a 48-bed shelter this fall.

Mayor Elliott Rothman said the city is looking at opening a year-round shelter in a state-owned armory building, which has recently been used as a winter shelter.

Public Counsel filed the class-action lawsuit in March, alleging that the constitutional rights of homeless people were being violated by city officials who confiscated and destroyed their property.

The 15-point Pomona settlement goes beyond the issues in the lawsuit by addressing the thorny topic of overnight camping.

Enforcement must stop until there are more shelter beds in the city than the unsheltered population in the most current count by the Los Angeles Homeless Services Authority. The 2016 count found 366.

The settlement parallels a similar legal battle in Los Angeles a decade ago. A federal appeals court ruled that L.A.'s practice of arresting and ticketing homeless people for sleeping in public was a violation of the 8th Amendment prohibition of cruel and unusual punishment because these residents had no other place to spend the night.

The ruling in what became known as the Jones case was vacated following a settlement in which L.A. agreed to stop enforcing its no-overnight-camping ordinance and to provide storage space.

Since then, the U.S. Department of Justice has called on federal courts to adopt the reasoning in the Jones case, but cities often sidestep the issue by enacting bans that cover only specific times of day or locations, said Jeffrey Selbin, director of the Berkeley clinic.

The Pomona settlement showed an unusual spirit of compromise.

The plaintiffs, for example, agreed that the city could continue enforcement at two railroad underpasses acknowledged to be drug hangouts.

"Our clients were in support of the city's request on this," Giorgio said. "I've toured these areas. On Reservoir Street it's very problematic."

Giorgio praised the city for agreeing to provide individual lockable storage, unlike the trash cans used in Los Angeles.

"Having lockers you have access to is a better way to go," she said.

In addition to a 120-gallon limit on property, the agreement allows bicycles, walkers, wheelchairs and an important item: collected recyclables.

"People will say they see that as trash," she said. "It's currency for many people working in that trade."

The settlement requires the city to pay $49,000 in damages to be distributed among the 15 named plaintiffs and no more than $160,000 in attorney fees.

Under the terms of a legal settlement, more than 350 homeless people in Pomona will be free to sleep and store their property in public spaces until the city provides shelter beds for them.
http://www.latimes.com/local/lanow/la-me-ln-pomona-homeless-settlement-20160911-snap-story.html
Tweet
How do you feel about this post?
Happy (0)
Love (0)
Surprised (0)
Sad (0)
Angry (0)
Tags:
West Coast
With no state standards, local police make their o...
Prosecutor reviews cases involving questionable ev...